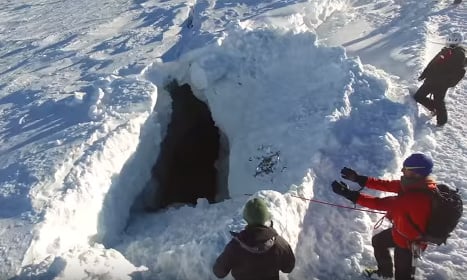 The drone is sent into the mountain crevasse. Photo: Screengrab/Youtube/Flyability

The Gimaball drone is designed to withstand collision and explore the most inaccessible areas on the planet.

It's unique design makes it an invaluable tool for mountain search and rescue teams, who can use it to investigate risky areas to find victims of mountain accidents, without putting rescuers in danger.

And on Monday, the Gimball went for a test drive, exploring a glacier in the Swiss Alps.

In the video, below, you can watch as the robot zooms over the glacier, taking in breathtaking views before entering the narrow crevasse, located at an altitude of 3,500 metres.

The views captured of the area have rarely been seen by humans.

The drone's makers, startup Flyability Lausanne, explained: “These narrow ice caves are inaccessible to all current robotic technologies, and present a huge risk to human rescuers.” But the Gimball carries out the mission with ease.

The expedition was carried out with assistance from a mountain rescue team from the town of Zermatt.
The drone's innovative design recently won its designers a prize of $1 million at the international 'Drones for Good' competition hosted in the United Arab Emirates.
The Gimball can access difficult areas, is easy to control and robust enough to survive crashes. Using its HD camera, live video streaming and an inbuilt lighting system, it captures images and sends them back to its operators.

Its secret lies in the patented rotating protective frame, and special flight control algorithms inspired by insects such as flies and developed over five years at Lausanne's prestigious EPFL technical university.