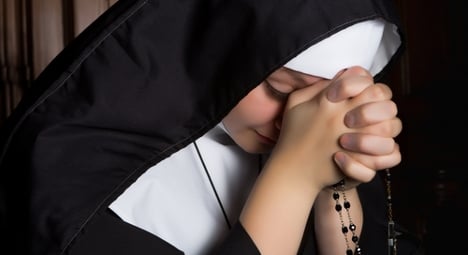 An Italian nun has alleged that sisters with the Franciscan order in Italy were routinely encouraged to engage in barbaric practices. Photo: Shutterstock

The startling allegations emerged after a report by Corriere della Sera in November claimed the brutal and humiliating rituals took place at some Franciscan 'Sister of the Immaculate' convents in Italy during the 1990s.

The order has since denied the allegations amid a Vatican probe but the nun, who has not been named by the newspaper, showed journalists a religious postcard bearing the image of the Virgin Mary on one side and her vows, allegedly written in blood, on the other.

The vows are written over seven lines and signed and dated June 15th, 1996. The purported blood-ink has turned a deep brown colour in the intervening years.

“We pierced our skin with needles before writing on the card and we were happy to do it,” the nun, who was 17 at the time, alleged.

“We were told it made our union with God stronger and more authentic,” she added, saying that the practice was common among newly ordained nuns at the time.

“They told us to destroy the cards afterwards but I wrote two and kept one at my parents' house.”

After the Corriere report, the Vatican prepared a dossier on the case and handed it over to investigators in Avellino, Campania.

The dossier reportedly contained the testimonies of members and ex-members of the order who attest to the rituals being encouraged.

A probe got underway over Christmas but Father Stefano Maria Manelli, the General Minister of the order, has denied all wrongdoing. A press spokesperson at the order could not be reached when contacted by The Local on Monday.

But the nun has insisted the allegations against the order are all true.

She claimed her group had been encouraged to engage in self flagellation each evening for the time it took to say five Hail Marys', five Our Fathers' and five Glory be to the Fathers'.

The woman also said that they had been given food to eat, such as yoghurt and canned meat ,that was long past its sell by date.

“They told us that if we ate it with obedience nothing bad would happen to us, but it wasn't true because I used to get serious stomach problems,” she added.

Father Manelli helped to establish the order in 1982 and there are currently nine convents in Italy and a further six worldwide. In light of his services to the order, the 82-year-old was put forward for beatification in 2010.