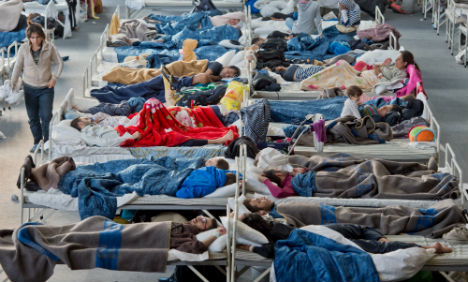 The Bundesbank estimated that the net immigration of asylum seekers — ie. the number of inflows minus outflows — could total over one and half million between 2015 and 2017.

Of these, “the share of non-employed persons will probably remain comparatively high for the time being as many newcomers will first need to acquire German language skills and other qualifications,” the central bank wrote in its monthly report.

Germany, the EU's biggest economy, this year looks set to take in one million people fleeing war and misery in what the government has said is its biggest challenge at least since national reunification a quarter-century ago.

Germany will take in more refugees than any other country in Europe, but many people are worried about the economic consequences of doing so.

The Bundesbank said that, initially, the rate of participation of the new arrivals into the labour force would be “just under 50 percent.”

That was “well below” the average for the general population, roughly three-quarters of which is in the workforce.

The aggregate labour supply was projected to grow by around 520,000 persons – or one and a quarter percent – in cumulative terms until the end of 2017, the Bundesbank said.

But, “the results of empirical studies suggest that this additional pool of labour will initially push up unemployment owing to low or irrelevant skills as well as cultural and linguistic barriers, with refugees only gradually gaining a foothold in the labour market,” the Bundesbank said.

According to the IAB Institute for Employment Research, the level of unemployment among foreigners from war-torn and crisis-stricken countries, many of whom were likely to have entered Germany only recently, “stands at around 40 percent,” the report said.

“Despite the currently favourable labour market situation, the projection assumes an unemployment rate of 70 percent in the first 12 months following recognition as a refugee, falling to a still sizeable 40 percent in the third year.”

This translated into an employment rate of around 15 percent in the first year following the granting of refugee status, rising to roughly one-third after three years, the Bundesbank said.

Turning to the general economic effect of refugee immigration, the Bundesbank estimated it could help boost domestic demand.

“The supply effects and the long-term impact on public finances will largely hinge on how quickly and effectively refugees are integrated into the labour market,” the central bank said.

“In the short run, the effects are likely to be comparatively modest due to the presumed low initial participation rate and high unemployment among these refugees, and their integration will remain a major challenge for some time to come,” it concluded.

PARTNER CONTENT
The fast track to a Swedish career

The German passport is one of the most powerful in the world – but getting your hands on one is no mean feat.

Alongside strict residency and language requirements, people who want to become a naturalised German citizenship will have to sit an exam known as the Einbürgerungstest (Citizenship Test).

The exam is designed to ensure that migrants understand important aspects of Germany’s political system, like the rights enshrined in the constitution, and can deal with aspects of day to day life and culture in the Bundesrepublik.

READ ALSO: TEST: Is your German good enough for citizenship or permanent residency?

Additionally, there are usually questions on important milestones in German history such as the Second World War and the GDR, and you may encounter some geography questions and questions on the European Union as well.

The test is in German and consists of 33 questions: 30 questions on Germany in general, and three related to the specific federal state you live in.

It’s all in German, so people sitting the exam need to be fairly confident with their reading skills – but since it’s multiple choice, writing skills thankfully aren’t required.

Though this may sound daunting, people are given a full hour to complete the test – and, anecdotally, most tend to finish much more quickly than that. You also only need to score 17 out of 33 (so just over 50 percent) to pass.

In addition, there are only a set number of questions that the Citizenship Test alternates between. You can find a list of all of them (in German) here, and also take a German-language practice test here.

READ ALSO: EXPLAINED: How I got German citizenship – and how you can too

If you’d like to test your knowledge in English, however, we’ve put together a representative list of 16 questions to get you started. Viel Glück! (Good luck!)

PARTNER CONTENT
‘Be more humble’: Top tips on how to ace your Swedish digital job interview
Url copied to clipboard!