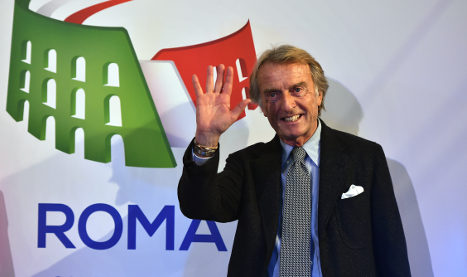 Speaking on Monday at the launch of the Rome 2024 bid logo – an image of the Colosseum in the red, white and green of the Italian flag – the motorsport legend shrugged off suggestions the Eternal City's campaign has been sluggish off the starting grid.

“We want these Olympics and we will work night and day to get them,” he told an unveiling ceremony at the Palazetto dello Sport, built to host basketball and weightlifting for the 1960 Games in Rome and still going strong as a sports and arts venue today.

The choice of logo reflects how Italy will fight to win the 2024 event under the banner of ancient Rome, capitalising on the city's unique historic heritage while playing down modern day problems of corruption, strapped finances and crumbling infrastructure.

“The message from today is clear, there is a big enthusiasm in the city, from the young people,” di Montezelemo told AFP after the ceremony.

“And we have a very clear vision with, behind everything, passion.

“I was lucky enough to win 19 world championship titles in Formula One. If I can contribute to bring these games to my country it would be maybe an even more important victory.”

Rome faces competition from Paris, bidding again after a heartbreakingly narrow defeat to London in the race for 2012, Los Angeles and Budapest.

The prospect of being able to stage events with the unrivalled splendours of Rome and the Vatican as the backdrop will inevitably carry sway with some of the IOC members who will decide the 2024 host in Lima, Peru in September 2017.

But with the Olympic movement still trying to cast off the legacy of its own corruption scandals, Rome may be handicapped by recent revelations of organized crime's infiltration of City Hall.

A scandal known locally as Mafia Capitale is currently in court with the trial of dozens of local officials, politicians and businessmen set to drag on well into next year.

The revelation that millions of euros destined for public services were being siphoned off by criminals through rigged tenders and other scams has damaged Rome's international image and left residents fuming over deteriorating public transport, refuse and road maintenance services.

Against that backdrop, some Romans question if a bid for the Olympics should be a priority ahead of investment in infrastructure.

Di Montezemelo's response is that the Mafia Capitale arrests and trial are a sign that the authorities have cracked the problem and that the Olympics can be a catalyst for a general upgrade of the city, as happened in 1960.

“It is the past,” he said. “The clean-up that is now taking place is very important. It will do the world of good for the city, for the citizens, for the country and for the Olympics.

“What we have now is a huge opportunity to use our team spirit to set a goal, take on a challenge.

“A lesson of Rome 1960 was to look ahead, to look at the town of the future. And you can still see today that Rome 1960 left to the town key infrastructural elements.”

Di Montezelemo, 68, is currently combining his leadership of the bid with the role of CEO and Chairman at Alitalia but he expects soon to have more time for the Olympic race.

“Thank God, in a couple of months I will leave the CEO role and I will remain only chairman. But I have been used to doing a few jobs together, so I will try my best.”