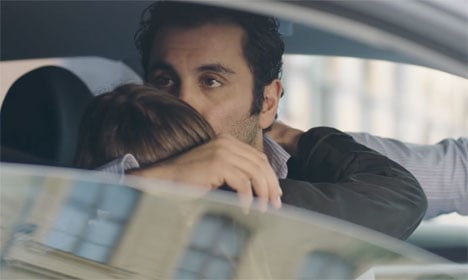 Screenshot: Care Norway
Care Norway has a message for the world’s fathers: protecting your daughter is about more than just guarding her from physical dangers, it’s also about changing attitudes.
The non-profit group has released a video called ‘Dear Daddy’ that has struck a nerve in the Nordics. In it, a daughter tells her father about all of the harassment and abuse she will suffer at the hands of men during her lifetime.
“I need to ask you a favour. Warning: it’s about boys. Because, you see, I will be born a girl. Which means by the time I’m 14, the boys in my class will have called me a whore, a bitch, a cunt and many other things. It’s just for fun of course, something boys do. So you won’t worry. And I understand that,” the narrator says.
“By the time I turn 16, a couple of the boys will have snuck their hands down my pants while I’m so drunk I can’t even stand straight. And although I say no, they just laugh. It’s funny, right?” the daughter continues.
She then tells her father about how she was raped at 21 by a family friend before finally meeting “Mr. Perfect”.  Things don’t stay perfect for long, however, and the boyfriend begins to both verbally and physically abuse her.
“Dear daddy, this is the favour I want to ask. One thing always leads to another. So please stop it before it gets the chance to begin. Don’t let my brothers call girls whores, because they’re not,” the video says.
Care Norway said it launched its ‘Dear Daddy’ (Kjærre pappa) campaign to highlight abuse at home and abroad.
“One in five daughters in Norway are subjected to abuse from a partner. Daughters of all ages, in all countries and at all levels of society are at risk. Everyone can do something, and as a father you have a special responsibility and a very special opportunity to keep your daughter from being subjected to violence,” the organization wrote.
The film has particularly struck a nerve in Sweden, where a Swedish-language version has been viewed over five million times on Facebook. The original Norwegian version has been seen well over 300,000 times and the group hopes that the English version released on Thursday will find similar success.