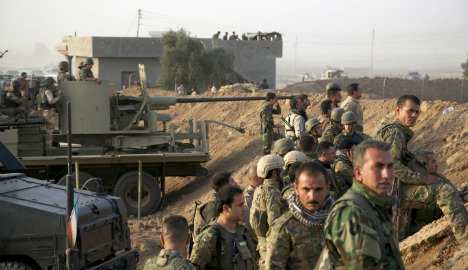 Kurdish Peshmerga fighters in northern Iraq. Germany has been supplying the Kurds with weapons and training to fight Isis. Photo: DPA

“The chief prosecutor currently has 135 cases open with around 200 suspects in connection with the civil war in Syria,” Justice Minister Heiko Maas told Bild.

“Across the country, there are roughly twice as many cases open.

“That shows: in Germany we have an especially tough terrorism law, which we will apply harshly. There is no tolerance for radical terrorists,” Maas said.

Experts warned in the wake of the Paris attacks that Germany would also be targeted by terrorists linked to Isis, the Islamic fundamentalist group occupying large swathes of Iraq and Syria.

“I'm convinced that Germany is just as much in the sights of the terrorists [as France], one leading MP told The Local at the time.

Germany's security services believe that around 750 people have travelled from the Federal Republic to Iraq and Syria to join the jihadi movement.

Around one-third of those – 250 people – have returned to Germany, the Federal Office for the Protection of the Constitution (VS) reported earlier this year.