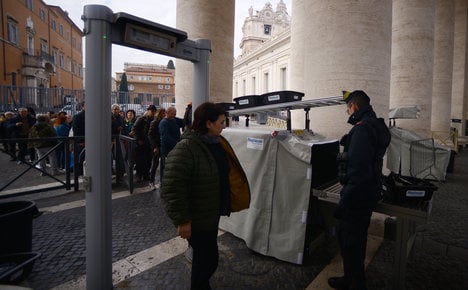 A Journalist has been charged with false public alarm after entering St Peter's square while carrying a toy gun. Photo: Filippo Monteforte/AFP

The woman, a 40 year-old freelance journalist, was charged with creating “false public alarm” on Saturday after making an online video which she sold to a national newspaper ahead of the Jubilee, which begins on Tuesday.

She had already taken pictures of herself posing with a real pistol but substituted the authentic weapon for a fake one to film inside St. Peter's, as the plastic gun was invisible to the metal detectors that surround the square.

The woman was filming a set piece for a report on security in light of the terror fears following the November 13th Paris attacks and repeated Isis threats against Pope Francis.

But police were not pleased with the woman's video and have charged her for what they see as an irresponsible action.

“The incident was especially displeasing because set pieces such as this help give the public a negative view of our security procedures,” a police spokesperson told Roma Today.

“But worse than this, they take up time and resources that should be spent providing safety and peace of mind to the public.”

The journalist was working with two others, who escaped punishment but were helping to film the stunt.