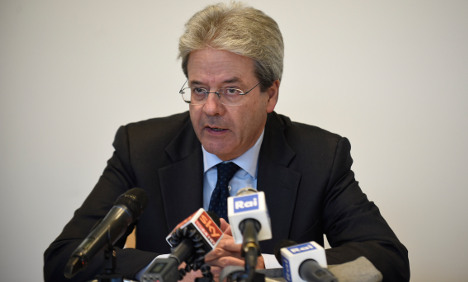 The December 13th conference in Rome aims to give “a decisive push for the conclusion of a deal for a national government in Libya”, where the Isis group is exploiting the chaos and taking root, Paolo Gentiloni told journalists.

“We want to speed up” the negotiations, because a political solution is the “only platform from which to counteract” Isis.

“We want an agreement between the Libyan parties, leading very quickly indeed to a national unity government and a UN Security Council resolution,” the minister said.

Experts have warned the so-called Islamic State has been shifting to Libya as the world focuses on its traditional power bases in Iraq and Syria, taking advantage of the chaos as rival militias and governments battle for power.

UN-brokered talks on the formation of a national unity government in Libya failed in the autumn and have yet to resume.

Former colonial power Italy wants its international summit on Libya to be along the same lines as a recent conference in Vienna aimed at ending the nearly five-year-old war in Syria.

The conference, convened by Rome and Washington, is expected to bring to the table Britain, China, France, Russia and the United States, as well as Algeria, Egypt and Morocco.

US Secretary of State John Kerry and Russian foreign secretary Sergei Lavrov have both confirmed they will be present.

Rome has repeatedly stated its willingness to lead a peacekeeping force on the ground should it get the green light from a national unity government and get the UN to sign off.

Italy is also on the frontline of a migrant crisis fuelled by the chaos in Libya, which has become an unpoliced launchpad for people traffickers shipping desperate people across the Mediterranean, frequently with deadly consequences.