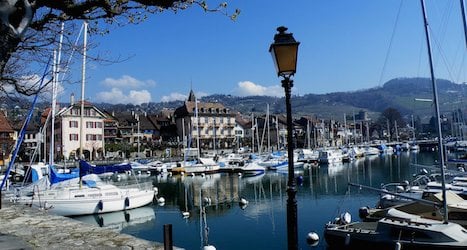 View of Lutry, site of the murder, from its harbour. Photo: Roy Lindman

The Vevey criminal court on Thursday found the man guilty of “murder by omission” after the prosecution argued that he was more interested in inheriting money from his mother — reportedly a millionaire — than her welfare.

Police discovered the woman’s body in her home in in the centre of Lutry, east of Lausanne, on November 15th 2011, the 24heures newspaper reported online.

Her unemployed son had waited for three days after she died before contacting a doctor, during which time he drank beer and consulted “extremely violent” pornography websites and funeral home information on the internet, the court was told, the daily said.

A medical expert testified on Monday that the elderly woman had a broken thigh bone and multiple traumatic wounds, according to the report.

He said she also suffered from malnutrition and dehydration.

It was not clear how the woman received the injuries.

Prosecutor Myriam Bourquin said police found the woman on a filthy mattress in a home that was a mess with broken windows, 24heures reported.

The expression on her face was contorted, suggesting that she had experienced appalling pain while dying, Bourquin said.

The 20 Minutes newspaper reported that the woman had spent 14 days on the floor.

The convicted man testified he did not seek medical aid because his mother was afraid of ending up in a seniors’ care home, the newspaper said.

“She refused to go to the hospital,” he told the court.

“I could not go against her wishes.”

The prosecution described the defendant as someone who was a manipulative liar, as well as being aggressive and completely without remorse for what happened, 24heures reported.

If the woman had received medical attention in time she would be still living, court heard.

Alexa Landert, the convicted man’s lawyer, said her client did not call for medical help because he believed the outside world was hostile, according to the report.

“He never wanted his mother to die and no-one can prove it, I plead therefore for doubt (about his guilt.”