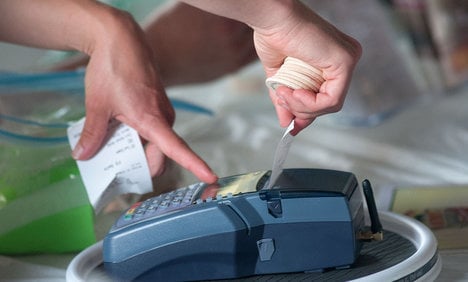 Italy's governing Democratic Party (PD) proposed the new legislation on Monday as an amendment to the wide-ranging fiscal reforms introduced with the so-called 'Stability Law' in June 2014.

“It's a question of freedom, citizens should be able to choose how they want to pay in any given situation,” Sergio Boccadutri, the PD candidate who presented the amendment told La Repubblica.

But struggling small business owners fear the move could have a heavy impact on their running costs and profits.

Currently, guidelines state that shopkeepers can refuse card payments on any items below €30. But under the new proposals, they would be forced to accept payments via a debit or credit card for all items, or risk fines.

Current EU laws mean that banks can take a commission of 0.3-0.4 percent on each card transaction, on top of costs of around €180 for installing a card reader.

“We don’t accept card payments and I am aware that the government want to make this mandatory,” Maria, a 52-year-old newspaper stand owner in Rome, told The Local.

“This would be devastating for us because it would mean installing a card machine, which is costly in itself. And we don’t sell high cost items so to have to pay a percentage would mean taking away from the little money we do make.”

The same concerns were echoed by Luca Forza, a 47-year-old tobacconist.

“We don’t accept card payments because we don’t have a telephone line, so this would be a huge expense for us,” he said.

“We’d have to pay for the installation [of the line] first of all and then the running costs so it would be extremely costly.”

Certainly, the changes could be an important milestone as Italy – like the rest of the world – moves towards becoming a cashless society.

“I normally have change with me, but I suppose if one day you’re stuck and want milk or bread then it could be useful,” 68-year-old shopper Roberta Gallo said.

But a greater convenience for consumers only paints half the picture. The move also comes as Italy tries to stamp out fiscal evasion, which occurs on a huge scale across the country.

A significant portion of such evasion happens when shops, bars and other retail outlets don't issue receipts for 'insignificant' items such as newspapers, coffee or a haircut.

Paying with a card makes a receipt inevitable and could help the government get back some of the hundreds of billions it loses in unpaid taxes each year.

But the Italian retail association, Confesercenti, warned that the government needs to be careful not to pass the costs onto businesses.

“These changes could be devastating for businesses which rely on a high volume of low cost transactions such as tobacconists, newsagents and petrol stations,” the association said in a statement.

By Patrick Browne and Ellie Bennett