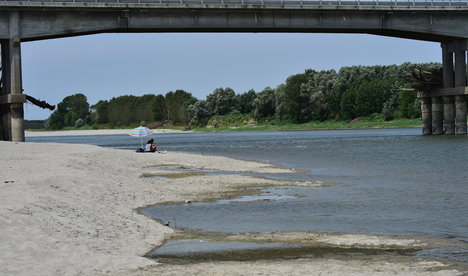 What remains of the Calderone glacier in Abruzzo. Photo: Guidosky

Twenty percent of Europe's Alpine glaciers melted between 1980 and 2000. With the speed of melting picking up, the glaciers could be gone by 2050, according to the fifth annual report by the Intergovernmental Panel on Climate Change.

A case in point would be Europe's most southerly glacier, the Calderone, which sits on the Gran Sasso massif in Abruzzo. Climate change has already sealed its fate and experts now say it will be gone by 2020.

As Italy's Alpine glaciers recede, the melted water contributes to rising sea levels. The loss of glaciers also increases global temperatures as the large tracts of white ice are no longer present to reflect the sun's rays back out to space. It's not just glaciers that are melting either. Fragile Alpine environments are particularly susceptible to climate change and are warming at three times the rate of coastal areas, something which threatens Italy's ski industry.

Figures from Italy's Ministry for Environment, Land and Sea show that the predicted end of the century changes of 4C in the Alps would eliminate nearly all snow cover under 2000 meters, while snow at higher altitudes would arrive later and melt sooner.

That would be bad news for Italy's 286 ski resorts, whose half-pipes, ski lifts and chalets may soon be nothing more than abandoned features in mountain meadows. As Italy's glaciers wilt in the sun, – the coastal waters around the country will rise, putting low-lying cultural treasures at risk.

These include a slew of Unesco World Heritage sites such as the archaeological sites of Pompeii and Herculaneum, which would be swallowed by the rising tide.

There is a lack of scientific consensus on just how quickly melting ice and thermal expansion will cause sea levels to rise, but even conservative estimates suggest that unless action is taken, sea levels could rise by 1.5 meters by the end of the century.

For starters, this would destroy the city of Venice. But that's not all: a look at the interactive map below shows that Pisa's famous tower could soon be leaning into the ocean. Higher global temperatures cause higher rates of evaporation, change the way air moves and affect the amount of water vapour the air can hold.

That might not seem like much, but on a global scale it is disrupting weather systems and causing violent and unpredictable events such as storms and droughts.

This is already happening in Italy and will only get worse if climate change is not tackled.

This year's extreme summer heatwave saw a tornado in Venice and floods and landslides across the country which cost lives and created millions of euros worth of damage. Unfortunately, Italy can expect more of the same over the next few years. Grapes are one of the most weather-sensitive crops and thrive in Italy thanks to its long, hot summers and cool, dry winters.

A 2013 study by Conservation International warned that if trends continue at the current rate, Italy's famed wines could soon disappear from our tables.

The study predicted that a majority of suitable wine-growing areas would be lost by 2050, after which wine production will increasingly start to take place in central and northern European countries.

But long before wine production has dried up completely, Italy's wines will become more expensive thanks to higher production costs as farmers spend on costly special measures such as irrigation.