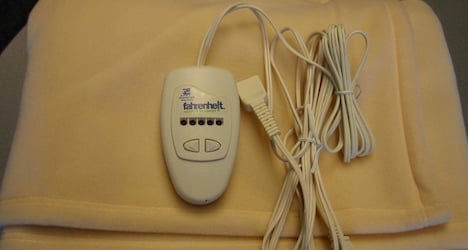 The incident occurred of Friday in an apartment in the village of Saint Sulpice, west of Lausanne, Vaud cantonal police said.

Police were notified of a fire in the building at around 9am.

Officers from the West Lausanne police, who arrived first on the scene, discovered the victim’s lifeless body in the apartment.

Specialists have launched an investigation into the cause of the blaze.

From the initial findings of the probe, it seems that the fire was caused by an electric blanket used by the victim.

Electric blankets have been identified as the cause of fires around the world.

No statistics were immediately available for Switzerland.

But in the UK, they were held responsible for 20 fatalities a year between 1996 and 2000, although the number of incidents has declined since then.

In the US, more than 35,000 fires were reported caused by electric blanket failures between 1992 and 2002, causing more than 40 deaths, according to a study done for the Austrian government in 2009.

It said that most fires involving electric blankets involve those that are “worn, with technical damage and deterioration of the heating element and wiring as a consequence”.

The report said that blankets produced before 1990 do not have an adequate “overheating protection”.

Experts recommend also that users of users of electric blankets turn them off before they go to sleep.