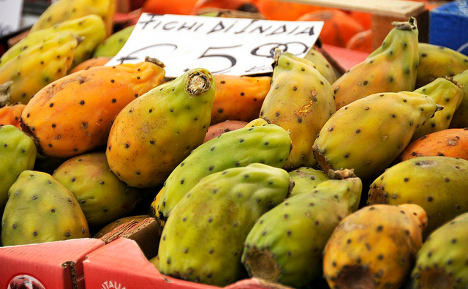 Instead, festive hosts looking to wow their guests should seek out locally-grown but less common fruit and vegetables such as prickly pears and persimmons or vintage varieties such as limoncello apples or madernassa pears, they advised.

Although Italians continue to generally favour produce grown as locally as possible, a “strongly growing snob trend” means the end-of-year festivities generate demand for out-of-season luxuries such as Chilean cherries and melons from Guadeloupe, according to farmers' organisation Coldiretti.

It calculated that one kilogram (2.2 pounds) of peaches flown in from Chile generates 21.6 kg of carbon emissions, arguing that switching to zero-miles produce could significantly cut transport's 40 percent share of total global emissions.

Other products on the Coldiretti blacklist included Brazilian watermelons, green beans from Egypt and blackberries from Mexico.

To underline their point, a delegation of farmers was offering homemade zero-miles fruit juices for marchers on a pre-Paris protest march scheduled for Sunday afternoon in Rome.

Snow is forecast in the hills of much of central and southern Italy. Photo: Miguel MEDINA / AFP

Italy’s Civil Protection Department on Monday issued ‘orange’ alerts for bad weather along Campania’s Tyrrhenian coastline and the western part of Calabria, while Sicily, Basilicata, Lazio, Molise, Umbria, Abruzzo, central-western Sardinia, and the remaining areas of Campania and Calabria are under a lower-level ‘yellow’ weather warning.

The European Centre for Medium-Range Weather Forecasts is warning Italy’s central-southern regions to prepare for a blast of polar air from the Arctic Circle that will bring heavy snowfall, rain and storms, reports national weather forecaster Il Meteo.

The village of Grotte di Castro in the province of Viterbo, two hours’ drive north of Rome, mountainous parts of Sardinia, and much of the province of Campobasso in the central-eastern region of Molise were already blanketed in snow on Monday morning.

The department is responsible for predicting, preventing and managing emergency events across the country, and uses a green, yellow, orange and red graded colour coding system for weather safety reports.

An orange alert signifies a heavy rainfall, landslide and flood risk, while a yellow alert warns of localised heavy and potentially dangerous rainfall.

The current meteorological conditions mean that snow is expected to reach unusually low altitudes of around 450-500 metres, with flakes already falling thickly on parts of the southern-central Apennines mountain range at 500-700 metres altitude.

The hills of Marche, Abruzzo, Molise, Lazio, Sardinia, Campania, Calabria and Basilicata are likely to see heavy snow around the 500m mark, while areas at an altitude of 1000m or higher will see between 50-60 cm of fresh snow.

In areas where the snow is unlikely to reach, heavy rains and thunderstorms are anticipated, with rain forecast throughout Sardinia, Campania, Calabria and Lazio, reports Il Meteo.

Strong winds are forecast over the whole country, with the island regions of Sicily and Sardinia facing windspeeds of over 100km/hour and the risk of storm surges, according to the national newspaper La Repubblica.

The north of the country, meanwhile, will see sun but low temperatures of below 0°C at night in many areas, including across much of the Po Valley.

While conditions are expected to stabilise on Tuesday, cold currents from Northern Europe are forecast to trigger another wave of bad weather on Wednesday and Thursday, with Sardinia and Italy’s western coastline again at risk of storms and heavy rainfall that will move up towards Lombardy, Emilia Romagna and Veneto in the north.

FARMING
Will Denmark see the return of mink farms in 2022?