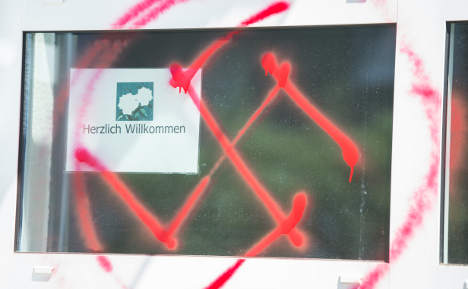 Swastikas are often daubed on mosques and Jewish grave stones, among other things. File photo: DPA

If anyone thought that it stopped being an offence to desecrate a swastika at the end of the Second World War, they should look to the small town of Limburg in Hesse, where Ralf Bender has been ordered to pay up for doing just that.

In spring 2013 the teacher decided to take matters into his own hands after repeatedly complaining to town authorities that there were swastikas graffitied on signposts in the vicinity of the primary school where he taughtt, reports the Nassauische Neue Presse.

Because the authorities failed to act, Bender took a can of black spray paint and covered up the Nazi symbols himself, wanting to eradicate the fascist markings before children came back from their school holidays.

The town reacted by demanding Bender pay the €1,000 cleaning costs.

On Tuesday, the state court upheld the town’s demand. While the judges said they did not have a problem with his action itself, the case was about the cost of cleaning up the damage, which he could have avoided if he had exactly covered the swastika with a sticker.

“It‘s a joke,” the teacher told the Süddeustche Zeitung, adding that “it was totally unimaginable to him” that one could have put a sticker over a symbol that was 20 centimetres high and 20 centimetres wide.

Bender told the SZ that he was deeply hurt by the experience, especially the “horribly shocking” fact that the town had never taken responsibility for its failures.

The graffiti was a mockery of the victims of the Nazis that one must never tolerate, he said.

“I stand in front of children every day. It is my job to set an example to them,” he said.

And he believes the Constitution is on his side, citing article 1 which says that human dignity is inviolable. In this regard, town authorities failed in their duty by not getting rid of the swastikas, he argued.

Although he has received sympathy from many people, others have also threatened him, forcing him to take security measures at home.

But Bender still refuses to pay so much as a cent of the fine, saying he will take it all the way to Germany’s highest court if necessary.

To pay it “would be an admission of guilt. But I am not to blame. I only tried to right a grave wrong.”