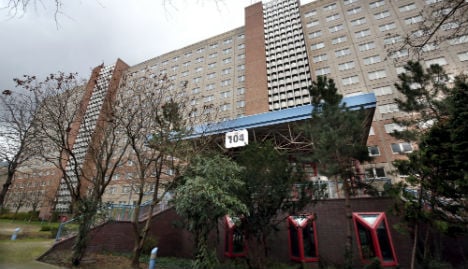 Nearly 500 refugees having been staying in the foreign intelligence wing of the Stasi (above). Photo: Wolfgang Kumm/dpa
Nearly 500 people, most of them from Syria, Iraq and Afghanistan, have been staying in the foreign intelligence wing of the imposing former Ministry of State Security since late Friday, the daily Berliner Zeitung said. Up to 900 people will eventually be housed there temporarily.
“The rooms will finally be used for something meaningful,” it quoted a spokesman for the German Red Cross (DRK), Ruediger Kunz, as saying.
The Berlin social services agency could not immediately be reached for comment on Sunday.
The office block was once the fiefdom of legendary spymaster Markus Wolf.
Dubbed “The Man Without a Face” because Western intelligence services long lacked even a photograph of him, Wolf directed one of the world's most formidable espionage networks for nearly three decades.
A legend in his own lifetime, Wolf successfully ran more than 4,000 spies across the Iron Curtain during his tenure from 1958 to 1987, infiltrating countless “moles” deep into the West German government administration.
Wolf's wing was used by the national railway company Deutsche Bahn in the 1990s but had been vacant for a few years, the Tagesspiegel newspaper reported.
Up to six people per office will sleep in bunk beds at the site, where asylum seekers can spend three months until they are placed in more permanent housing.
The main Stasi headquarters, where the enormous agency kept vast records on East German citizens, would remain a museum, the Berliner Zeitung said.
Around 7,000 Stasi employees worked in the sprawling complex in the city's Lichtenberg district, which was stormed by protesters in the weeks after the Berlin Wall fell in 1989 to stop staff from destroying files.
German authorities are scrambling to find beds for up to one million asylum seekers expected in the country this year alone.
In October, the iconic airport Tempelhof, built by the Nazis and later the staging ground for the Berlin Airlift, was also converted into a temporary shelter.