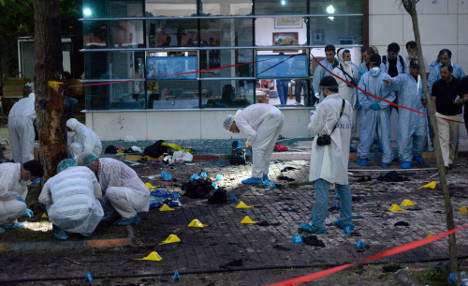 To her mother in Mönchengladbach, 20-year-old Valentina is the sweet girl in braces in family pictures.

But in Turkey her photo is being seen in a very different context – as one of a group of jihadist terrorists wanted by local law enforcement.

Turkish authorities suspect the young woman from the Rhineland is, along with her friend Merve, a member of a dangerous Isis cell in the country and have distributed her picture to Turkish media in their hunt for clues, reports the Süddeutsche Zeitung (SZ).

Ever since a bomb attack in the southern city of Suruç in late July in which 33 people were killed, the two young Rhinelanders' pictures and names have been included on a list of 21 suspected Isis members, along with their Turkish husbands.

Local security services believe the group are actively planning attacks and may target public transport in the run up to parliamentary elections scheduled to take place at the weekend.

Turkey has been shaken by a series of bloody attacks on citizens and police in recent months, with the worst being an attack on a protest in Ankara earlier in October which left over 100 people dead and more than 500 injured.

For a while Turkish investigators believed Valentina's husband Ömar was one of the suicide bombers responsible for the crime, but DNA tests appear to have disproved this theory.

And it is not just in Turkey that the two young women have fallen under the authorities' gaze. State prosecutors in Düsseldorf have been investigating them on suspicion of preparing an act of violence against the state for months.

Valentina and Merve first travelled from Mönchengladbach to Turkey in 2013, with the aim of entering northern Syria and marrying Isis fighters. But they were stopped at the time by Turkish police.

Valentina, who has German citizenship, was sent back home. Merve, who has a Turkish passport, was allowed to stay and married some time afterwards.

Back in Mönchengladbach, Valentina waited for her next opportunity to get out to the jihadi battleground while pretending to try and make a go of her life in Germany. In 2014, she also smuggled herself out of the country and into Syria.

But the story of the radicalized young women also throws up questions about the competence or willingness of Turkish security services.

The SZ reports that tracking Valentina down should not be a hard task.

Her parents in Mönchengladbach have several phone numbers for her in Turkey. They also hold names of contact people there and even have a Turkish address from which their daughter has regularly picked up post.

German authorities are also stumped as to why their counterparts in Ankara are unwilling to cooperate.

“We told the Turkish authorities that a corresponding investigation is underway here,” Willy Theveßen of Mönchengladbach police said, adding that “this didn't lead to any direct contact with the Turkish security services”.