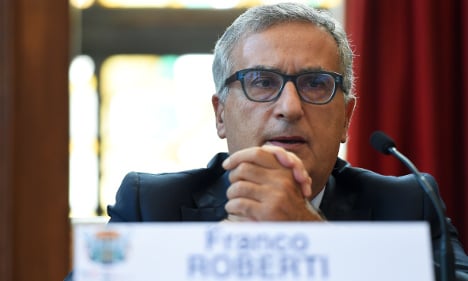 Prosecutor Franco Roberti said the toddler was used as a "human shield" in a deadly mafia war. Photo: Anne-Christine Poujoulot/AFP

Italian police said two people had carried out the bloody attack, which saw three-year-old “Coco” Campolongo shot in the head alongside his grandfather Giuseppe Iannicelli and his grandfather's Moroccan girlfriend in a mob hit linked to drug-dealing territory.

Drug-dealing Iannicelli had been trying to expand his business in Cosenza – a territory controlled by the powerful 'Ndrangheta mafia – and had begun taking his grandson with him on drug runs in a bid to stave off reprisals.

“He took him with him everywhere, using him as a human shield,” prosecutor Franco Roberti told journalists, as police said the pair accused of murder were already behind bars serving time for extortion.

The two attackers, Cosimo Donato, nicknamed “mouse”, and Faustino Campilongo, known as “potbelly”, lured Iannicelli to a meeting purportedly to pay for a batch of drugs, then killed all three.

They murdered Coco because he recognised them, police said.

The discovery of the child's body strapped into a car-seat in a burnt-out Fiat Punto in January 2014 sent shockwaves through Italy, as did the murder just two months later of another three-year-old in the nearby Puglia region.

The toddler's mother was serving time for drug trafficking at the time of the attack. He had previously lived inside the jail with her for a year before being handed over to the custody of his grandfather.

The pope visited the Calabria region after the attack despite fears he might provoke the local underworld and launched a scathing attack on organised crime, declaring all mafiosi “excommunicated” from the Catholic Church.

People who are excommunicated are expelled from the Church, unless they repent, and are considered to be condemned to Hell in the afterlife.

“It must never again happen that a child suffers in this way,” Francis said, slamming the mafia as an example of “the adoration of evil” as he met Coco's father and grandmothers in the second-poorest region in southern Italy.

According to Save the Children Italy, more than a third of all families in the impoverished south live in communities known to be under the control of clans.

And according to local anti-'Ndrangheta campaigners, 30 children have been killed in clan violence since 1950, many gunned down during attacks on their parents or other family members.

The powerful and secretive 'Ndrangheta plays a leading role in the global cocaine trade and its bastion, the Calabria region, is a major transit point for drug shipments from Latin America to the rest of Europe.