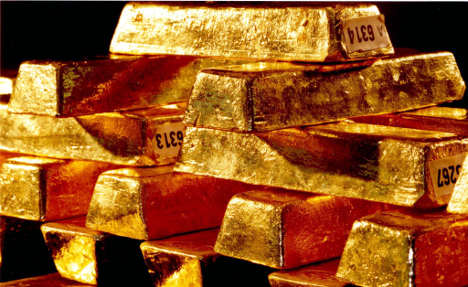 The Bundesbank's catalogue stretches to 2,300 pages, listing every bar of gold Germany owns, where it is, how much it weighs and how much of that weight is gold.

It shows that Germany owns 270,316 bars of gold stored in four countries – giving it the second -highest gold reserves in the world behind the USA.

But the majority of that wealth is not stored in Germany, with the biggest stock housed in New York while other reserves lie in Paris and London.

The largest gold reserves in the world are in the Federal Reserve Bank of New York, where many countries house their gold.

As Germany built up its reserves in the 1950s and 1960s other countries traded their New York based gold stocks to the Bundesrepublik (Federal Republic), which chose to leave them where they were.

Carl-Ludwig Thiele, an executive at the Bundesbank, explains in a video on their website that during the Cold War when Germany was a possible battle ground in a 'hot' war it made sense to keep its reserves as far west as possible.

Now though the Bundesbank plans to relocate its Paris reserves to Frankfurt.

By 2020, Germany should have no gold left in the French capital.

Jens Weisman, head of the Bundesbank, says that the French reserves no longer serve a purpose due to changes in the international security situation and the fact that both countries have the Euro – meaning that the gold can't be traded against a foreign currency.

Once the relocation of the gold is completed 50 percent of Germany's gold will be in Frankfurt, 13 percent in London and 37 percent in New York.

But bringing the treasure home is not without its dangers.

“Every transportation is a security risk“ said Thiele. “Especially for the people transporting the gold.”