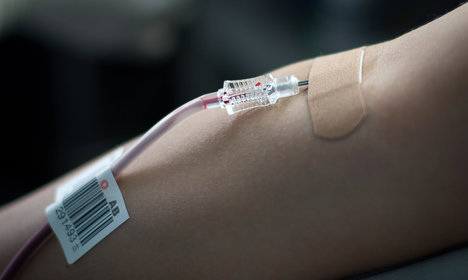 A stripper may sue a southern Italian hospital after staff refused her give blood donation. Photo: Ed Jones/AFP

The 35-year-old woman from Brescia became a stripper just four months ago when her long-time partner lost his job.

She was also motivated to donate blood because of him too – just three months earlier his life had been saved by an emergency blood transfusion.

But a few days ago, staff at Morelli refused her offer to donate blood after it emerged she had a profile on the website escort5stelle.it.

Even though her profile on the site states explicitly that she does not have sex for money, and was just a stripper for private events, such as stag parties – the hospital still refused.

The woman explained the sexless nature of her work and told the staff she was in a monogamous relationship, but they still refused her offer of blood on the grounds that she posed a sexually transmitted infection (STI) risk.

Offended and upset, the woman went to the legal rights group, Agitalia, which is said to be examining the possibility of launching legal action against the hospital, whose behaviour Agitalia has referred to as “highly discriminatory”.

“It is not clear in this case what risk the woman posed. She was in a formal and stable relationship,” Agitalia was reported as saying in Corriere della Sera. “Even if her job could be seen as 'immoral' or 'unorthodox', it cannot be seen as an STI risk.”