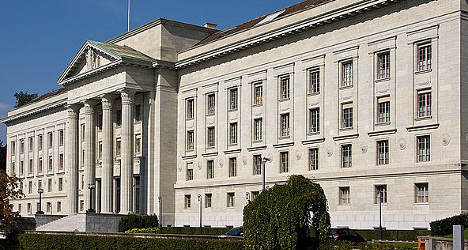 Judges at Switzerland's Supreme Court said the couple could not be registered as the twins' biological parents. Photo: Roland Zumbühl/Picswiss

The twins, now aged three, were carried to term by a surrogate mother in California and are the result of anonymous egg and sperm donations to the couple.

In California, the Swiss couple from the canton of Aargau are listed on the birth certificate as the children’s parents.

However, authorities in Aargau refused to allow the parents to register the children.

A subsequent appeal to the Switzerland’s Supreme Court has now also failed, the Tages Anzeiger newspaper reported on Thursday.

In its ruling, the body said that Switzerland's ban on the use of surrogate mothers meant that such a registration would contravene the constitution.

In Switzerland, all forms of surrogacy are forbidden in a bid to stop children being downgraded to commodities and to prevent the commercialization of mothers' bodies.

The parents, who have no connection to the US, have now been left with one option: they can adopt their own children.

It would still need to be established that the couple were suitable parents and that the adoption was in the best interest of the twins.

But the court said a Swiss adoption process would eliminate uncertainty over the legal status of the children. To date, there has been a danger that the children could be made to leave Switzerland.

In a similar case in May, two men who used a surrogate mother in the US argued they should be both be registered as their child's parents in Switzerland.

But Switzerland's supreme court ruled that only the man with a biological link to the child could be registered as a father in the Alpine country.

In a ruling on that case, the court said it did not wish to encourage reproductive tourism.