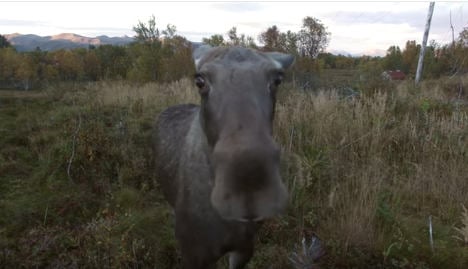 The elk put his nose right up close to the hovering drone. Photo: Screen Grab/Youtube

Kolbjørn Hoseth Larssen, a former TV2 journalist turned media teacher, is such a keen drone photographer that he always keeps his device in the car.

So when on Thursday he heard that there was an elk on the loose in a nearby village, he had to try and film it.

“I was driving some rubbish to the dump, when I happened to hear on NRK traffic that an elk had been observed at Hadselhamn,” he told Vesterålen Online.

“I had the drone in the car, but was missing a memory card. So I went and bought a card, drove to Hadselhamn and found the elk.”

When he arrived he found several elk but all of them ran away apart from one particularly curious animal who stayed to study the hovering craft.

“I have been trying to do this for a long time, but the elk always run away, even if I am several hundred meters away,” he told the local Nordlys newspaper.
“Only the one remained, and I think it may be a curious young animal, even though I am no elk expert,” he added.

Whether in nature or in the city, if you do see an elk in Sweden, always keep a distance. Photo: Lola Akinmade Åkerström/imagebank.sweden.se

Police needed to shoot the elk after they wandered into residential areas including Nacka and Enskede in the capital, Mitt i Stockholm reports.

“An elk that has got lost can usually find its way back if it is calm. But when people run up and take pictures, it becomes stressed and aggressive. It is utterly misanthropic and it’s outrageous that people do not understand better,” police officer Kenneth Kronberg, responsible for the National Game Accident Council (NVR), told the newspaper.

“Game wardens have agreed that there is nothing wrong with the elk in the city. However, they get very stressed because there are so many people trying to take pictures. That’s why we have to kill the elk, because of 08-ers [a pejorative term for Stockholmers] who think the animal world looks like a Walt Disney movie.”

As well as avoiding taking photos with the animals, police also urged the public to avoid attempting to pet or stroke them, or getting too close. If you see a wild elk, instead you should keep a safe distance away.

In 2017, a rare while elk drew crowds of visitors hoping to catch a glimpse after a video went viral, and again police had to warn the public to treat the animal with care and avoid approaching it. The elk then grew aggressive, charging at a dog-walker, which led police to say they would need to kill the elk if they could not chase it away from the residential area.