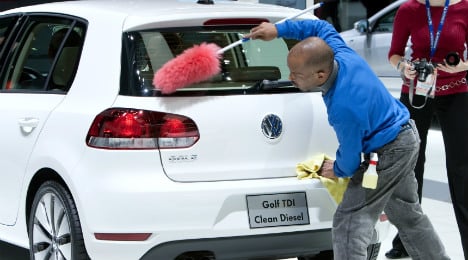 A worker dusts a Volkswagen Golf diesel model at a 2010 auto show in the USA. Photo: DPA

The collapse in the stock price of Germany's largest car company led sections of the German media to suggest company CEO Martin Winterkorn was under considerable scrutiny.

The US Environmental Protection Agency (EPA) claimed on Friday that Volkswagen had deliberately avoided its duties under the “Clean Air Act” by disguising the true emissions figures of its diesel engines from the agency.

The EPA allege that with the help of a computer program, Volkswagen only activated emissions control systems on diesel engines when they were undergoing official testing, meaning that emissions were far higher when the cars were in day-to-day use.

Nearly half a million cars produced between 2009 and 2015 are reported to be affected, including Golfs, Jettas and the Audi A3, produced by Volkswagen subsidiary Audi.

The Wolfsburg-based firm now faces a fine of up to $18 billion as well as the incalculable damage done to its reputation.

Winterkorn promised on Sunday to undertake a wide-reaching investigation into the incident.

“These events are of the highest priority for the company board, and for me personally,” he said. “We are working with the relevant authorities openly and without restriction, in order to to bring clarity to this incident as quickly as possible.”

The Green Party called on Sunday for an investigation into the company in Germany, to examine whether it had been using the same software to trick Germany authorities.

“We are demanding in the Bundestag (German parliament) that an investigation takes place, and we'll also look into whether German authorities facilitated these activities by looking in the other direction,“ said Bärbel Höhn, Green Party MP and head of the parliamentary environmental commission.

“The transport ministry and the EU commission must now look into the extent to which this software was used in Germany and Europe to falsify emissions figures,“ said Ferdinand Dudenhöffer, professor at the University of Duisburg-Essen and expert on the automotive industry.