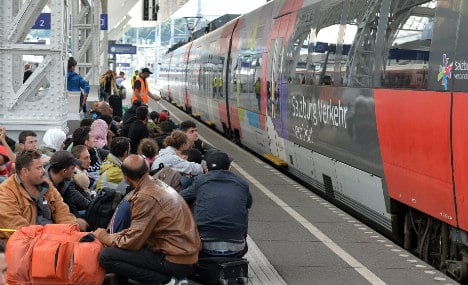 “It is a problem for the entire European Union and therefore we argued for a special EU summit to be held next week,” she said during a joint press conference with Austrian counterpart Werner Faymann. “Donald Tusk will look into that.”

Striking back at critics of her refugee-friendly policy in recent weeks, the Chancellor added that “if we must now begin to excuse ourselves for showing a friendly face in time of need, then this isn't my country.”

Merkel said it had been important to show support for refugees after the vicious anti-migrant demonstrations in the Saxon village of Heidenau in August.

While Germany and the EU find themselves in “a not totally simple situation,” she continued, the Union had always managed to find solutions in the past.

“I say again and again: We can manage this, and we will manage it,” she said.

'Threats are not the right way'

Merkel also used the press conference to reject threats from Interior Minister Thomas de Maiziere to cut EU funding to countries that refused to take in a share of refugees arriving in Europe.

“The negotiations situation is such that nothing happens to countries which refuse. We need to talk about ways of exerting pressure. These are often countries that receive a lot of structural funds from the European Union,” de Maiziere told television network ZDF.

But Merkel warned that “threats are not the right path”, insisting that “once again, we must manage to create a European spirit” around the refugee crisis.

Hopes of a quick, unanimous deal on distributing refugees across the bloc collapsed in the face of opposition from Hungary, the Czech Republic, Slovakia and Romania at the crisis meeting of interior ministers in Brussels on Monday.

The crisis meeting of interior ministers in Brussels did formally agree however to launch a plan first proposed in May to relocate another 40,000 asylum seekers from Greece and Italy over the next two years.

Germany, which is expecting to receive up to a million asylum-seekers this year, has been pushing for other European countries to take their fair share of refugees.

Vice Chancellor Sigmar Gabriel said Tuesday that Europe “disgraced itself” when EU ministers failed to reach agreement on a quota plan to share the refugee burden.

“Europe once again disgraced itself yesterday,” Gabriel said a day after EU ministers failed to reach unanimous agreement on a plan to take 120,000 refugees.

EU countries needed to understand that “the whole of Europe is at stake”, he said, adding that “what we are experiencing now threatens Europe far more than the Greece crisis”.

“Our country can't solve the refugee problems of half the world by itself,” said Gabriel, who on Monday predicted Germany will receive as many as one million asylum seekers this year, up from the official forecast of 800,000.

Gabriel said that given the flood of refugees into Europe “160,000 places is a drop in the ocean”, referring to the total number of people the bloc was debating taking.

He also suggested that EU aid funds be used to exert pressure on member states to accept binding quotas of refugees.

“Germany is not ready to be a net payer country in a Europe where everyone wants to join in when they get money, but are not willing to share the responsibility,” he said.