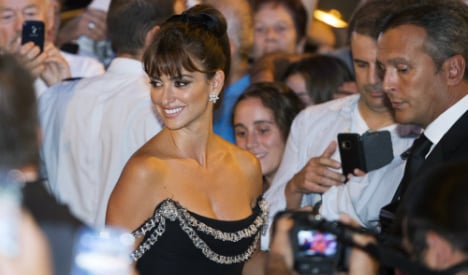 “This is one of the most wonderful characters that I will ever be offered to play,” the 41-year-old actress said during an interview with radio Cadena Ser on Wednesday ahead of the film's release.

“I fell in love with the story of this woman, who is like a goddess, a sage,” Cruz said, before adding that at first the role “frightened” her.

The Oscar-winner was in Madrid on Wednesday for the premiere, along with her husband, fellow Oscar-winning Spaniard Javier Bardem.

The Spanish actress plays Magda in the movie, a gutsy unemployed teacher with a young son who faces her cancer diagnosis with optimism and courage.

“It was very important to me to take risks and at no time did I worry if I looked beautiful, was ugly or very ugly,” said Cruz who was named the “Sexiest Woman Alive” by Esquire magazine last year.

“It is a tribute to all women who face this disease,” she added.

Cruz rose to international prominence in 2001 with roles in Hollywood films “Vanilla Sky” and “Blow”.

She won a best supporting actress Oscar for her role as an impetuous artist in Woody Allen's 2008 comedy “Vicky Cristina Barcelona”.

The actress last made a movie in Spain in 2009 when she starred in Spanish director Pedro Almodovar's “Broken Embraces”.

She also made a very brief appearance in Almodovar's 2013 “I am So Excited” alongside Antonio Banderas.