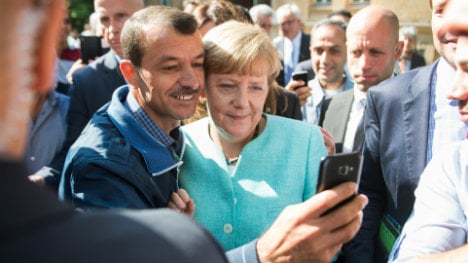 A refugee takes a selfie with Chancellor Angela Merkel during her visit to an accommodation centre on Thursday. Photo: DPA

While Merkel spoke during a visit to a branch of the Federal Office for Migration and Refugees (BAMF) in Berlin, she was supported by Labour Minister Andrea Nahles.

“Only one in ten [refugees] can immediately get into work or education,” Nahles told MPs debating the federal budget for 2016 in the Bundestag (German parliament) as she announced up to €1.1 billion of funding for labour integration.

Merkel added that integration will “certainly also partly happen through children, who will quickly learn German in kindergartens,” speaking at another appearance at refugee accommodation in the west Berlin borough of Spandau.

The Chancellor said she was impressed by “the amount of love and affection refugees are hosted with here”.

And she added that integrating children quickly into schools in “welcome classes” aimed at those who spoke no German at all, as happens in Berlin, was a “trend-setting concept” that could be a model for all of Germany.

“It's worth it to take care of every single child,” Merkel said. “There is so much enthusiasm among the children, so much readiness to learn, and we want to give them a good future.”

Merkel thanked the local authorities and the volunteers who had put in hard work to take care of refugees, especially the BAMF workers who were processing masses of asylum applications “under very unusual, difficult circumstances.”

“If 1,000 refugees arrive in Berlin every day, it's a gigantic challenge,” she said, but added that “every individual's fate is being taken seriously” by the government.