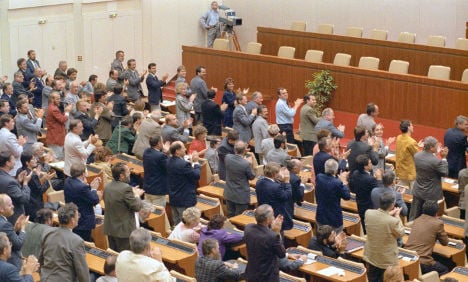 At 3am on August 23rd, MPs applauded as the People's Chamber set a date for reunification. Photo: DPA

Twenty five years ago, the People's Chamber (Volkskammer) in East Germany had a monumental decision on their hands.

The German Democratic Republic (GDR) was preparing to join the Federal Republic of Germany (FRG): the public wanted it, the leading parties were pushing to achieve it, and the recent introduction of the Deutsche Mark hinted that the two states were already becoming one.

But when exactly would reunification happen?

It wasn't until August 23rd that the German public finally had a date to write in their diaries.

On this day, the People's Chamber – the single legislative body in East Germany –  passed a resolution setting the accession of the GDR into the FRG for October 3rd that year.

The decision “sealed the fate of the GDR,” Professor Schroeder, head of research into the East German Socialist Unity Party (SED) state at Berlin's Free University, told The Local.

However, even before August 23rd, the East German state had begun to crumble.

“Since the first democratic vote on March 18th 1990, the signs had been pointing towards the GDR's entrance into the FRG,” Stefan Wolle, Academic Director at Berlin's DDR Museum told The Local.

On that spring day, the People's Chamber held its first free election in over 40 years – and when the votes were counted, 41 per cent were for the East German branch of the Christian Democratic Union(CDU) – West Germany's governing centre-right party.

This made one thing clear: voters wanted reunification.

In November 1989, West German Chancellor and CDU chairman Helmut Kohl had announced a 10-point programme aiming to bring East and West Germany together.

“The voters' choice was clear,” Wolle said. “They voted in the CDU because Helmut Kohl had promised a quick reunification.”

This meant that members of the new government  couldn't get too comfortable in their posts: their main task was to negotiate the dissolution of the country they had just been elected to govern.

'A state in freefall'

After March 18th, the two states began to move closer together – and on July 1st, the Deutsche Mark officially replaced the Ostmark as East Germany's official currency.

But until August 23rd, uncertainty still reigned in East Germany.

“During these months, the GDR was a state in freefall,” Wolle told The Local.

“The GRD laws weren't valid any more, but then neither were the laws of the FRG,” he explained – and this created a sense of “zero gravity and freedom.”

The decision to join the FRG on October 3rd “put an end to this period of cheerful anarchy,” Wolle said.

However, the GDR didn't really have much choice, said Schroeder.

Hugely reliant on the Federal Republic for finincial aid, the GDR “was no longer viable,” he said – and by the time August 23rd came around, the East German state was bankrupt.

Impelled by a combination of public demand, financial necessity and political efforts, the wheels of reunification were already turning long before August 23rd 1990.

But whether it marked the end of anarchy, the kiss of death for the GDR or simply a case of comparing diaries and checking schedules, August 23rd was the day on which East and West Germans knew their two nations would soon become one.