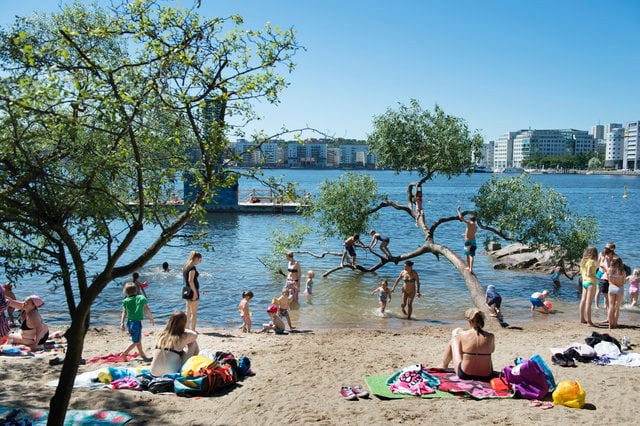 1. Sunbathing is a nine-to-five job

To Swedes, the short Nordic summer is not depressing: it's a challenge.

So when the sun comes out: do not under any circumstances get off the beach. While other nationalities hide in the shade at midday, Swedes sweat it out. You've only got a limited number of hours to bask in the sunshine. Make sure you use them all before the heatwave goes away.


Go to the beach and stay there. Photo: Jessica Gow/TT

Swedes don't just seek out the sun for warmth: there is also that much-desired, but oh-so-elusive, tan. However, in typical 'lagom' spirit they like to build it up over time, so don't forget to slap on the SPF 30 lotion if you're heading to the seaside.

This is partly because Swedes are a health-conscious bunch who are well clued up on the risk of skin cancer, and partly because their sensitive Nordic alabaster skin has a tendency to turn them into human crayfish look-a-likes if they forget to bring their sunscreen. A Swede's beach towel is his castle. And if you owned a castle you would not leave it would you? Because you've been to the beach since early in the morning, you have probably picked out the best spot. So if you go for a dip or make a brief foray to the ice cream kiosk, one member of your group must be assigned to towel guarding duty.

Thieves are top of Swedish beach bunnies' list of concerns – so make sure you never leave your valuables behind either. Don't worry, you'll soon get used to swimming while trying to keep your smartphone above water level. Make sure someone is always on towel duty. Photo: AP Photo/Sergei Grits

Swedes will not give up on their regular meals whether they are at home, at work or on the beach, and it goes without saying that if you are going to stick it out for the whole day, without leaving your towel, you need energy.

Common staple beach foods are potato salad and cold meat for lunch and cinnamon buns for an afternoon 'fika' snack. Don't turn your nose up at sand in the food. It just adds an extra bit of crunchy texture. Don't forget to bring something to eat and drink. Photo: AP Photo/Lionel Cironneau

Repeat this a hundred times: leave at least a two-metre wide space between your towel and your neighbour's. It does not matter how crowded the beach is – Swedes are sure to frown on you if any of your belongings end up touching theirs. They are used to hanging out in open spaces and large offices and cannot stand their personal space being invaded.

Also, there is the danger that if you edge too close to them, they may think you are trying to steal their towel or valuables – see number three in this list. Find a spot as far away from others as possible. Photo: AP Photo/Brendan Farrington

6. Take your clothes off (within reason)

Swedes are reserved and are unlikely to flaunt their goods in the queue to the ice cream stand – but on their towel they are not afraid to let go of their inhibitions in order to avoid getting a bikini line. With some of the world's most liberal attitudes to nudity, one in ten Swedes, and more than a quarter of Swedish women, have sunbathed topless on their holidays, according to a 2014 survey by Expedia.

There are also plenty of special naturist beaches for those who like taking – and leaving – their clothes off at the seaside. Just remember that nudity does not automatically translate into sex. Seriously. The Swedes are pretty comfortable with nudity. Photo: Henrik Holmberg/TT

7. Spend time on the beach in winter too

We're not kidding. Winter swimming is a popular pastime in Sweden, with many beaches keeping their facilities open over the colder months. Lakes also routinely freeze over at winter and it is not uncommon to saw up a hole in the ice and plunge into it, just because you can. But don't worry, this activity usually comes with a long sauna session and a hot cup of chocolate afterwards.

The icy practice has also made it on to some schools' curriculum. Watch The Local's video of a class of young teenagers in Stockholm daringly jumping into 2C waters in January – we dare you not to shiver.

READ NEXT: Five beaches you won't believe are in Sweden

Finding a quiet spot to put down your beach towel can be pretty challenging during the peak summer period in Alicante.

The pandemic and ongoing travel restrictions mean many Spaniards are spending their holidays in the country, and the Valencian province is particularly popular among national tourists, just as it is with foreign visitors.

For peace seekers, that unfortunately means packed beaches and the usual hustle and bustle that comes with life in Spain.

However, Alicante’s coastline has lots of fairly unknown beaches and coves where you are less likely to encounter crowds. They may not all have fine white sand and all the usual amenities but their ruggedness and natural beauty are part of the charm.

Here are ten playas (beaches) and coves (calas) in Alicante where you may find the peace and quiet you’re after.