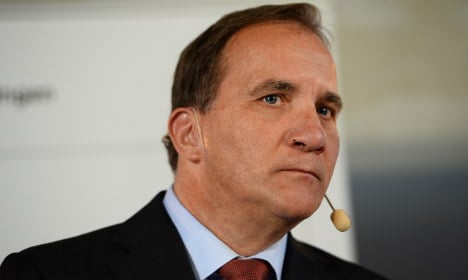 Prime Minister Stefan Löfven on Wednesday. Photo: Maja Suslin/TT
The Social Democrat leader told a news conference in Barkarby, just outside Stockholm, that he was planning “the largest jobs initiative in many, many years in Sweden”.
Stefan Löfven said that his party and its junior coalition partner, the Greens, wanted to ensure that 150,000 new jobs were created over the next two years and said that this would form a key part of its upcoming autumn budget, which is set to be fully revealed in October.
Having announced investments worth nearly six billion kronor in the spring, Löfven said that Swedes could expect to see another 8.5 billion ploughed into job creation if its next budget is passed by parliament.
Criticising the centre-right Alliance that led Sweden between 2006 and 2014, Löfven added: “now the cuts agenda is over, we can we turn things around for Sweden and we can do it with the new jobs agenda.”
He promised to boost training and education in Sweden, noting the paradox that there are currently 80,000 unfilled vacancies in the country and adding that some businesses are being “forced to curtail operations because they cannot find the right workers”.
The Prime Minister reiterated his promise that he can cut Sweden's unemployment rate, which currently stands at around 7.4 percent, to less than five percent by 2020. This would give the Nordic nation a lower proportion of people without work than any other EU country, a goal that has been questioned by Sweden's National Institute for Economic Research, which has predicted that the rate is unlikely to go below 6.6 percent.
READ ALSO: Do you know how Sweden is being run?
Löfven also committed to expanding Sweden's construction sector, as he and his housing minister, Mehmet Kaplan, again promised to expand affordable housing for students and others on low incomes, amid an acute accommodation shortage in the country's major cities.
Meanwhile Industry Minister Mikael Damberg promised a focus on the “new industrialisation” of Sweden, with cash invested in the “digitalisation” of the country's economy.
And Sweden's finance minister, Magdalena Andersson, told reporters that she wanted the government to spend less on providing supplementary education for foreigners moving to Scandinavia who were already highly qualified in their fields in their home countries. She pointed out that 30 percent of Syrians moving to Sweden had been in higher education.
The centre-left government's budget will be debated in parliament in October and should come into force in January but it looks set to be passed following a controversial deal between the major parties last December.
Following a political crisis, Sweden's main groups came up with an agreement that if it looks like a government budget won't get enough support, then the main opposition parties either won't vote for or won't put forward a rival budget. This is in contrast to last year when the centre-right Alliance suggested an alternative budget which ended up getting more support than the coalition's offering, because it was also backed by the nationalist Sweden Democrats.