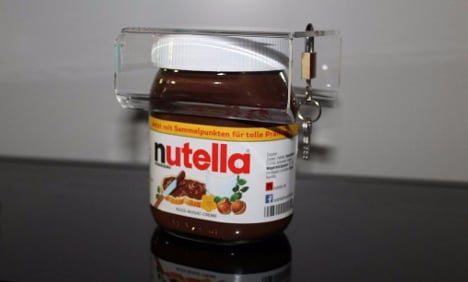 Next month, fans of the hazelnut spread can look forward to further crackdowns on Nutella crime, as specially designed “Nutella Locks” return to eBay Germany.

The gadget consists of an acrylic frame and padlock which, when locked, prevents the lid being twisted off.

'It started out as a joke'

Daniel Schobloch, of Borkenkaefer Furniture and Fittings, came up with the idea.

“The idea started out as a joke,” Schobloch told The Local by email. “One of my friends was always getting worked up because his children were stealing his Nutella.”

Schobloch designed an acrylic lock that the man could fasten over his treasured Nutella jar.

But word soon got out about the invention – and as the news spread, others wanted one too.

“As the demand continued to grow, we decided to offer the device on ebay,” Schobloch explained.

Nearly 1000 have already been sold, wiping out the group's original stocks.

The Nutella Lock will be available again at the end of August. Screenshot: eBay

At the moment, the product is only available to pre-order on ebay Germany. However, the team plan to have a new batch ready for delivery by the end of August.

However,  people shouldn't use the gadget as a serious security device, Schobloch told The Local.

“Acrylic is easy to break into,” he explained – adding that most people buy the lock as a joke for someone who always complains about having their Nutella stolen.

Meanwhile, many parents simply want to stop their children gorging on the hazelnut spread while their back is turned.

With the device patented and the branding finished, Schobloch and his team hope to bring the Nutella Lock onto the open market soon.

So it won't be long until even more sweet-toothed breakfasters are able to secure their spreads – making Nutella crime a thing of the past.