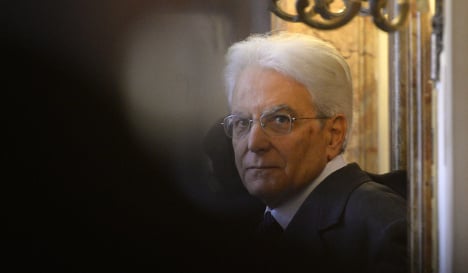 Under a presidential decree which takes effect in September, only one third of those who live in 58 subsidized apartments near the Quirinale Palace will have the right to stay beyond 2018.

Unlike his predecessor Giorgio Napolitano, Matterella has also demanded staff pay rent for the first time, while subsidized rents will also rise if staff continue to live in some of Rome’s most expensive real estate surrounding the palace in the sought-after historic centre.

Tenants are currently paying an average €300 to €400 a month – well below the market rate – for a one hundred square metre apartment in Via Dataria, just metres from the Trevi Fountain.

Another apartment – which measures 190 square metres and comes with a huge terrace – costs less than €1,000 a month.

Italian media reported that the president’s goal was to save public funds and make the buildings available for public use.

The 58 apartments are located in four buildings surrounding the elegant palace which has stunning views across the rooftops of Rome.

According to media reports, the decree states that accommodation will be assigned to those who perform critical roles at the palace which require “the need for availability, flexibility and extended service beyond working hours”.

Those who remain will face rental increases of 20 percent . Meanwhile, car parking will be free for the first vehicle and cost €150 for the second vehicle.

“What really matters is that within two years those apartments will go back to being a public asset,” a palace spokesman told La Repubblica.