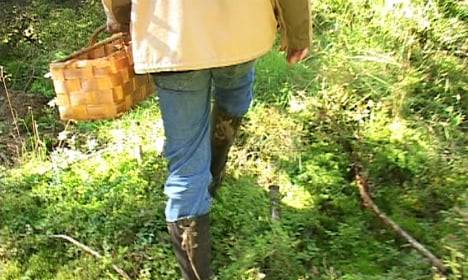 The man was so ill he couldn't talk. Photo: Karin Markehed/ TT

What looks like it will become a bumper season for mushroom harvesting in Sweden almost claimed its first real victim overnight to Sunday, when a man in his mid-40s fell unconscious after accidentally eating what is believed to have been a white-coloured death cap mushroom.

The man, who managed to call the emergency services from his home in Linköping before he lost consciousness, reported experiencing severe cramps after having enjoyed a mushroom meal earlier in the day.

“He had such bad cramps that he couldn’t even speak. They could just hear him breathe in a very worrying way,” police spokesman Magnus Holmström told Swedish tabloid Aftonbladet, noting that the man’s condition rapidly deteriorated during the call to the point that he couldn’t speak.

“He was in such a bad state that they could get neither his name nor his address out of him.”

Because the man was using a pre-paid mobile phone that was difficult to track, it took the emergency services almost 90 minutes to locate him and admit him to a nearby hospital where he was still being treated on Sunday morning.

The man is now said to be in stable condition, having obtained only slight injuries, and will remain in hospital for observation.

According to Swedish daily Expressen, the man probably mistatook a death cap with a harmless mushroom variety.

Scores of people are poisoned by mushrooms in Sweden each year. Last year, ten Thai students studying in Uppsala were briefly admitted to hospital after making a stew on death cap mushrooms after heading out to the woods to harvest the dinner.