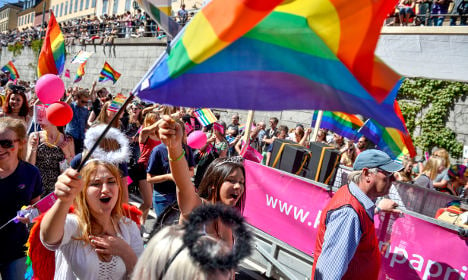 Stockholm Pride organizers put three photos on Facebook showing nipples last Thursday evening, but by lunchtime the following day one of the pictures had been removed in compliance with the social network's company policy, which does not allow naked female breasts to be shown.

“Three of our promotional pictures have been gendered and one taken off Facebook. This is despite the fact that we had not written the sex of the models,” the organizers wrote on the Stockholm Pride Facebook page.

“Two have been assessed as male bodies and remained in our albums. A third has become gender-determined as a woman’s body, and that image has been reported as a violation of their community standards regarding nudity and was deleted.”

“It is strange and unfortunate and regrettable that this is the dual message in what is for many a crucial issue,” Ehne said. Stockholm Pride believes that Facebook is contradicting its own position on the issue after the social network introduced a spread of new options for their Swedish sites, allowing users to choose between 70 different gender identities such as the Swedish expressions “transkille” (trans guy) and “ickebinär” (non-binary).

Sweden's gender neutral pronoun 'hen' is now also available as an option for the first time. Users will be able to choose to be referred to as 'hen' for example when Facebook friends are prompted to “wish 'hen' a happy birthday”.

“Hen is a very important word that has grown huge and that really says something about you,” Emelie Mire Åsell of Swedish gay and trans gender rights organization RFSL told The Local at the time.

“People were extremely positive when we told them of this change and more than 1,000 people helped us compile the list which demonstrates the huge commitment concerning this issue.”

Stockholm Pride said it had contacted Facebook for an explanation but had not yet received any response.

Around 400,000 spectators and 40,000 marchers were expected at this year's pride march, which took place on Saturday.