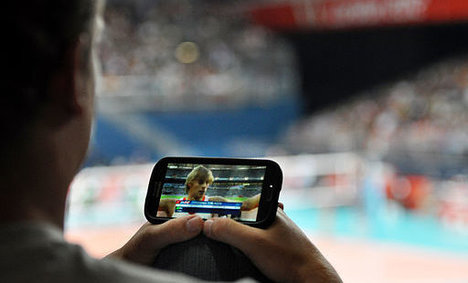 Smartphone crazy? A spectator follows the match on his phone. Photo: Marco Verch

The study, which was published on Friday, revealed Italians to be the heaviest users of smartphones among their EU counterparts in Germany, France, Spain and the UK.

According to the results, Italians' favourite activity is chatting on their smartphones.

Among the smartphone owners in Italy, 75 percent of men and 81 percent of women used instant messaging apps, compared to an average among those in the five EU states surveyed of just 60 percent for men and 63 percent for women.

The most popular messaging app among Italians is WhatsApp, currently used by 59.6 percent of Italian smartphone owners.

And when mobile-mad Italians are not chatting, they are probably on social networks. The report showed that 61 percent of male and 65 percent of female smartphone owners use social networking sites on their mobile phones, compared to the EU average of 53 and 57 percent, respectively.

Italians aren't just socializing on their phones either – they also consume news media more than their European counterparts.

According to the data, 55 percent of male and 51 percent of female smartphone owners read local or world news on their devices, compared an average of just 49 and 41 percent across the five countries surveyed.

Problems can include vision loss, numb fingers, wrist strain and a spinal problem known as “text neck” caused by people continuously craning their necks to angles of up to 60 degrees to read messages on their phones.

These are not the only potential problems caused by smartphone use either.

Last week it emerged that Italian drivers taking a selfie of themselves while driving was responsible for a major spike in accidents.