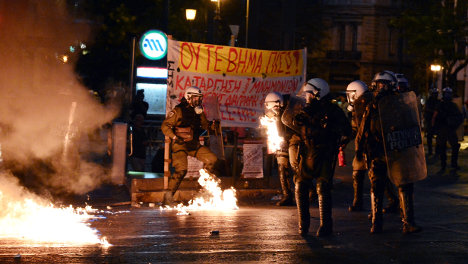 An Italian was among those arrested on Wednesday night in Athens during violent anti-austerity protests over a new bailout deal. Photo: Louis Gouliamaki/AFP

Paolo Teobaldelli, from the central Italian city of Macerata but who lives in the Greek capital, was found in possession of “objects functional to carrying out acts of violence”, Ansa reported, citing sources.

The sources said that Teobaldelli, who remains in prison, was known to police for his links to anarchist groups.

Firebombs thrown by protesters exploded in front of Greece's parliament as it approved a slew of reforms required to win the new bailout worth up to €86 billion, which was agreed with eurozone leaders on Monday morning after an all-night summit.

The violence erupted on the sidelines of a march of over 12,000 people opposed to the deal, which many fear will exacerbate the country's financial woes.