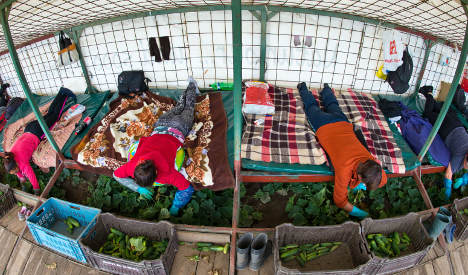 Germany was one of the top countries in Europe for the amount of money that migrant workers sent back home in remittances, according to a report by the International Fund for Agricultural Development.

Remittance payments refer to regular payments that migrant workers send back to their families in their home countries. The report said that this money usually covers “basic goods, such as food, clothing, shelter, medicine and education”.

“Remittance payments can make up 50 percent of a family's income – at the least,” explained Pedro de Vasconcelos, head of the IFAD remittances programme, to The Local. “They need this money in order to sustain the family, send kids to school, have shelter and food. And hopefully have some to save and invest.”

Germany ranked behind Russia ($20.6 billion) and the United Kingdom ($17.1 billion) for the most money sent outside the country by migrant workers, followed by France ($10.5 billion) and Italy ($10.4 billion).

Unlike the other countries in the report, Germany saw migrant workers sending the largest portion of money to other European states.
Poland was the main recipient of funds from German migrant workers at $2.3 billion, followed by Lebanon and Hungary, which each received nearly $1 billion.
Meanwhile, the strong migration links between Turkey and Germany were reflected by the fact that 48 percent of remittance money arriving in Turkey came from Germany. In Kosovo this proportion was second highest.
Still, De Vasconcelos told The Local that the relationship between Turkey and Germany has changed over time since a 1960s “guest worker” programme between the two countries ushered in a wave of Turkish migrant workers.
De Vasconcelos said that while a decade ago Turkey received about $7 billion in remittance money from Germany, it now takes in roughly half a billion euros.
“Some Turks have returned, and for others the ties with families have changed,” he said. “This is one example that shows the impact of Germany on Turkey and its development over decades.”
Top Countries Where German Migrants Sent Money The report said that though the amount of money sent by migrant workers to families outside of the country might seem high, these payments did not result in a “significant outflow of wealth”.

In total European migrant workers sent home $109.4 billion, which helped to support more than 150 million people across the globe, the report said.

One-third of this money went to countries within Europe, especially to Ukraine, Poland and Romania.

The report calls for efforts to lower the costs migrants face in transferring funds to loved ones, which eat up about $2.5 billion in transfer fees each year for European migrants.