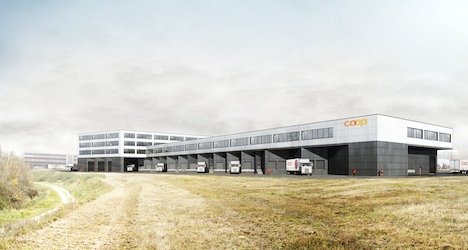 The complex will be built next to an existing distribution centre for the cooperative in Aclens-Vufflens, a light-industrial area northwest of Lausanne with good rail connections.

The facility is scheduled to be operational by 2018, when Coop said it plans to close down its distribution centre dating from the 1950s and 1960s in La Chaux-de-Fonds in the canton of Neuchâtel.

All employees in La Chaux-de-Fonds (around 70 according to the ATS news agency) will be offered jobs elsewhere with the cooperative group, Coop said in a news release.

Meanwhile, it said employees (around 270) at an administrative site set for closure in Renens, near Lausanne, will be transferred to the new Aclens-Vufflens centre.

The go-ahead for the centre was linked to a decision by the Vaud cantonal government to build a new 5.5-kilometre road to Aclens-Vufflens, costing 75.5 million francs, that will connect with the A1 motorway.

The canton said in a statement that its investment is part of a strategy to develop a “dorsal spine” for rail-road logistics in Vaud.

Already, Coop services 42 retail outlets in Geneva by train from Aclens, which results in less truck traffic on the Lausanne-Geneva motorway.

The canton called the Coop development “excellent news for Vaud's economy”, while ATS reported that 1,400 jobs could be created at the site between now and 2023.

Coop is also planning to develop a new rail hub in Bienne/Biel in the canton of Bern for multi-modal transportation, involving containers that can be carried by rail and by trucks.

This will help improve the efficiency of deliveries while reducing carbon dioxide emissions by “several hundreds of tonnes per year”.

Coop has a nationwide logistics and bakery strategy launched in 2010 that aims to optimize administration and commercial activities.

Construction has already begun on a new distribution and logistics centre in Schafisheim in the canton of Aargau, set to open this fall, followed by an industrial bakery there in the spring of 2016.

Earlier this year, Coop described the Schafisheim project as the largest private construction site in Switzerland.

“One of our subcontractors was hit by a digital attack, and that’s why our checkouts aren’t working any more,” Coop Sweden, which accounts for around 20 percent of the sector, said in a statement.

“We regret the situation and will do all we can to reopen swiftly,” the cooperative added.

Coop Sweden did not name the subcontractor or reveal the hacking method used against it beginning on Friday evening.

But the Swedish subsidiary of the Visma software group said the problem was linked to a mayor cyber attack on US IT company Kaseya on Friday.

Kaseya has urged customers to shut down servers running its VSA platform after dozens were hit with ransomware attacks.

A wave of ransomware attacks has struck worldwide recently, especially in the United States.

In recent weeks, such attacks have hit oil pipelines, health services and major firms, and made it onto the agenda of US President Joe Biden’s June meeting with Russian counterpart Vladimir Putin.