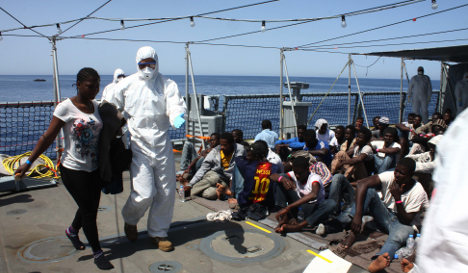 A German marine with refugees rescued from the Mediterranean on May 14th. Photo: DPA

“We know that this mission is not an answer that somehow sets aside the problem of refugees,” Foreign Minister Frank-Walter Steinmeier said.

And Development Minister Gerd Müller was dead set against using military force to stop the movement of people.

“Taking traffickers' boats out of circulation yes, but do that without military operations.

“There are too many hidden risks and it won't solve the real problems,” the conservative politician told the Passauer Neue Presse.

Their voices of caution were joined by those of Migration Commissioner Aydan Özoguz and Europe Minister Michael Roth, who wrote in the Frankfurter Allgemeine Zeitung that “we must fight the reasons people are fleeing, not the refugees”.

But Defence Minister Ursula von der Leyen said that “the German navy will certainly be involved in phase one” of the plan, a reconnaissance mission to evaluate the smugglers' operations.

Phases two and three of the plan would see EU forces search and confiscate ships at sea before soldiers are sent to take control of harbours on the Libyan coast.

Libya, currently riven by civil war following the Western-backed toppling of Muammar Gaddafi in 2011, is a stop on the way for 80 percent of illegal people smuggling in the Mediterranean.

Figures from the International Organization for Migration show that 1,780 people died trying to cross the sea to Europe in the first four months of 2015.

Two German ships are already deployed in the Mediterranean and have been involved in operations to save thousands of lives.

The Mediterranean operation will officially start after the next foreign ministers' council on June 22nd.

Its headquarters will be set up in Rome and led by Italian rear admiral Enrico Credendino.

EU funding will total around €12 million in the two-month initial phase, which will see ships, radar, satellites drones and wiretapping used to identify and find the traffickers.

But moving on to military operations will mean getting the consent of the UN Security Council, where the UK is pushing for a resolution, and permission from the Libyan authorities.