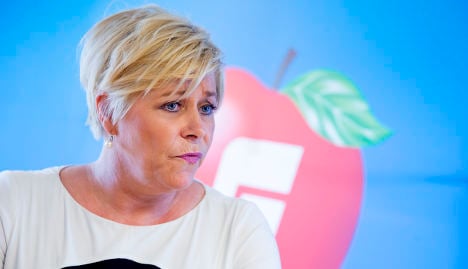 Siv Jensen at a party press conference this week. Photo: Håkon Mosvold Larsen / NTB scanpix
Finance Minister Siv Jensen, who also leads the populist Progress party, made her statements in an interview with Aftenposten journalists Trine Eilertsen and Harald Stanghelle.
When asked, ”are you Convinced that the climate change that has been documented over the past decade is manmade?”, Jensen responded, “no”.
“So you have doubts about it?” the interviewer went on, to which Jensen answered “yes”.
The head of Norwegian environmental campaign group Nature and Youth on Tuesday called for Jensen’s resignation.
“It’s not possible to have a climate denier as finance minister in the climate year 2015,” Arnstein Vestre said in a statement. “Siv Jensen has shown herself to be clearly unfit for a ministerial role, and now Erna must get a grip. Siv must go.”
Nina Jensen, the head of the WWF in Norway, who also happens to be Siv Jensen's sister, slammed the statements as "irresponsible" and called on Jensen to clarify her stance on climate change.
"Any political leader who casts doubt on anthropogenic climate change today is not doing their job as a role model," she said. "No leader can currently expect to be taken seriously if they are contesting climate change."
On Tuesday night Jensen denied that she had publicly questioned climate change and said that the Progress Party supported the "precautionary principle", taking action to prevent climate change despite scientific uncertainty because the potential risks of failing to act are so significant.
“There is no doubt that there is climate change, but a lot more  research is needed, both on the human impacts and on the other factors which affect climate,” Jensen told Norway’s VG tabloid.
She said that the Progress Party was in agreement with it’s Conservative coalition partners about the need to strengthen climate agreements.
“We recognize that there is climate change, and have said that we will follow the precautionary principle,” Jensen said.
Prime Minister Erna Solberg has recently excused Norway’s weak climate change policy by pointing to opposition to strong action on the climate from within her own coalition.
“It is tougher to stand up for climate change issues in a government where some people are not very concerned about it,” she told Aftenposten, referring to the the unpopularity of Norway’s environment minister Tine Sundtoft.

CLIMATE
Northern European cities to be as hot as Australia by 2050, scientists say
Url copied to clipboard!