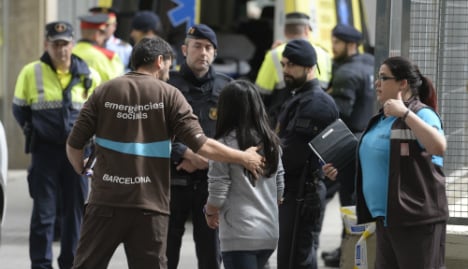 Information is slowly emerging about the shooter, a pupil in second ESO (year eight) at the Joan Fuster secondary school in La Sagrera area of Barcelona.

He arrived late at school on Monday April 20th, rang the bell and, when a female teacher answered the door, shot her at close range in the face.

Hearing screams and a commotion, a substitute teacher who had only been with the school a matter of weeks left his classroom to come to the aid of his colleague.

He was dealt a fatal wound to the stomach.

The 13-year-old – who has the initials M P C – then stabbed two students and another teacher, whose injuries are not serious according to reports.

The young teenager had arrived at the school carrying a backpack in which he had a machete and crossbow. He was "wearing camouflage clothing".

Clearly intent on causing damage, he also had hidden within his backpack, a Molotov cocktail, fashioned out of a bottle of beer, according to Catalan daily, El Periódico. It is not known whether the fact that the day chosen to carry out the attack held any significance for the perpetrator. Is it merely a horrible coincidence that the attack was carried out on April 20th, the date of the Columbine massacre?

Monday was the 16th anniversary of the US high school shootings, in which 12 students and one teacher were murdered by two students, who then turned the guns on themselves.

A report in Catalan daily La Vanguardia said that the pupil was "obsessed with the military" and had "a collection of weapons at home".

A fellow pupil told the newspaper that he had said he wanted to "kill all the teachers in the school" and had "drawn up a list of 25 names" that included both teachers and pupils.

According to the boy's social media profiles, he is a fan of the US series The Walking Dead, which includes a main character, Daryl Dixon, whose weapon of choice is a crossbow.

Several Spanish newspapers are reporting that the young teenager was suffering from a "psychotic episode" and police sources described him as "delirious", telling officers that he had heard voices that told him to kill. Police kept him in the school for several hours after the incident but he has now been moved to the Hospital de Sant Joan de Déu for psychological assessment.

Some Spanish media are reporting that the pupil used a "modified crossbow", fashioned from wood and ball point pens, to carry out the attack, but police sources have said that the crossbow was "almost professional" and “slightly modified”, refusing to confirm whether the projectile used was a pen or pencil.

Eyewitness accounts quoted in Spanish daily, 20 minutos, say that he took the Molotov cocktail out of his bag and threatened to throw it, before beginning to shout and then fleeing the scene.

A teacher managed to stop the pupil, who told him he had "been hearing voices telling him to kill his teachers and classmates" for some weeks.

According to Spanish daily 20 minutos, the boy said the voices worsened on Sunday evening, the night before the attack.

The pupil had drawings of Nazi symbols, such as a Swastika, in his school desk.

He cannot be charged under the Spanish legal system because he is under the age of 14, the legal age of responsibility in Spain.