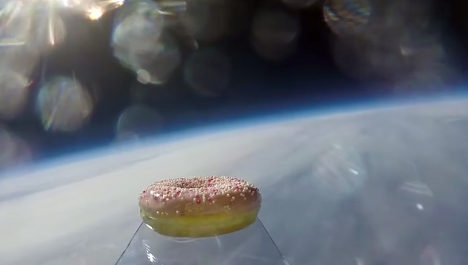 The donut as it reaches the edge of space at 32km above ground level. Photo: Screen Grab from YouTube

Swedish brothers Alexander and Benjamin Jönsson launched their confectionary cargo from Norway last week, sending it up 32 kilometres above the surface of the earth, right to the edge of space, filming every moment with an onboard camera.

“I'm really into space and photography and I used to play around with weather balloons back in school. Then we had the idea that we should send something really crazy up into space and thought 'hey, nobody has ever sent a donut up before',” Alexander told The Local.

The two brothers, who come from Lysekil in Sweden, close to the Norwegian border, launched their craft from Askim in Norway together with pals John Johansson, Johannes Jönsson and Rasmus Ankarskär, as it was much cheaper to get the necessary flying permits.

A few hours after the launch, the vessel crash landed across the border in Lake Vättern, where volunteers from the Swedish Sea Rescue Society salvaged the wreckage of the air balloon and the soggy remains of the donut.

Alexander and Benjamin posted a video of the venture on social media, which has gone viral in their home country, making the pair into YouTube celebrities in the process.

“Loads of people have been in touch about it and there's been a lot of media interest too. Things have been a bit all over the place!” said Alexander.

It is not the first time weird objects have been ejected into space. Luke Skywalker's light sabre and some pizza are but a few of the items sent far into the depths of our universe by space agencies. And in 2008, Nasa transmitted Beatles song 'Across the Universe' in the direction of the star Polaris, 431 light years from Earth.

Meanwhile, the two Swedes are busy thinking of how they're going to top their donut launch.

“We've been kicking around various ideas. We're thinking of going to the United States in 2017 when they will have a total solar eclipse to send up a weather balloon. But the thing is, how do you top a donut?”