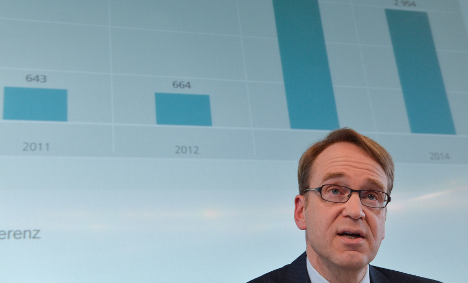 "Until the autumn, an improvement in the economy had been discernible. But the new government has gambled away a lot of trust," Weidmann said in an interview with weekly magazine Focus on Friday.

"I am opposed to an increase in the emergency loans," said Weidmann, who as head of the German central bank sits on the European Central Bank (ECB)'s decision-making governing council.

Greek banks are the main source of financing for the government, but the ECB has restricted their ability to purchase short-term debt known as treasury bills, the main instrument used by Athens for emergency financing.

German-Greek relations are in tense stages as the new Greek government is trying to secure long-awaited accord with its creditors providing funds vital to avert a state default.

Relations did seem to be more amicable when Tsipras visited Berlin earlier this week, but 63 percent of Germans still considered relations to be "bad", and only 20 percent could see any future improvement in the light of Tsipras' visit, the ZDF survey also showed.

But the survey did reveal that the percentage of Germans who want Greece to leave the Euro has gone down since the visit.

A few weeks ago 52 percent said they wanted a "Grexit" but the latest ZDF survey showed that this figure is now 45 percent.

This is also fewer than the number of Germans who want Greece to stay in, which is now at 49 percent, up from only 40 percent in the previous survey.

More bad news for the Greek government came earlier this week when the ECB announced it has also suspended a waiver allowing Greek sovereign bonds from being used as collateral for loans in its regular refinancing operations.

That means Greek banks now rely on the Emergency Liquidity Assistance (ELA) facility for funding, which is more expensive than the regular refinancing operations.

Earlier this week, the ECB increased the maximum ELA that Greek banks can get from the Bank of Greece by €400 million to €71.1 billion.

Weidmann rejected Athens's claims that it could no longer meet its financial obligations. "I don't buy the argument that they are financially overburdened," he said.

Weidmann appears to be sceptical: "Generally speaking, I get the impression that the statements given by various government members can be very different, depending on the day and the audience," he said.

"Ultimately, that doesn't inspire much confidence."

An extra dimension was added to the tense negotiations over the debt crisis when Greek Prime Minister Alexis Tsipras said that Germany owed his country war compensation worth hundreds of billions.

The German government hasn’t dismissed the idea completely, proposing a German-Greek fund that would promote reconciliation between the two countries.

But a survey published on Friday by TV channel ZDF showed that the German public do not feel the same way.

According to the survey, 78 percent of Germans rejected the idea of paying Greece war reparations, with only 15 percent agreeing and seven per cent unsure.