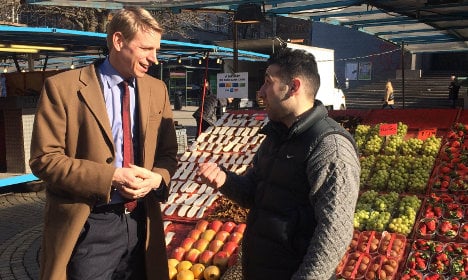 Hötorget in central Stockholm has been the main hub for the Swedish capital's market traders for centuries. When The Local visits on Tuesday morning the season has only just started, but the sunny square is already bustling with shoppers and stall holders.

In most countries the gorgeous tulips on sale or the deliciously red strawberries would have you reaching for your change immediately. But in high tech Sweden, few people carry around cash any more, forcing tradespeople to find new solutions.

Fruit and vegetable stall owner Ramazan Korkmaz, who has been offering card payments for two years, tells The Local: “People kept asking 'can I pay by card?' and I had to say 'no, sorry'".

Four out of five purchases are made electronically or by card in Sweden, which leads the way in Europe. A report last year suggested it could become a cashless society by 2030.

The picture is very different in other parts of Europe. In Italy, for example, three-quarters of all consumer purchases are still paid for in cash. But in Sweden, even taxis and sellers of homeless magazine Situation Stockholm offer card payments.

However, some of the main critics of the cashless trend have warned that it is a development that could end up excluding the elderly and disadvantaged people living outside the banking system, as well as increasing the risk of internet crime.

The Swedish parliament's finance committee is set to meet with bank bosses and trade industry experts on Thursday to discuss the pros and cons of a cashless society.

“We think there are great advantages to the digitalization of society, not least that you don't have to carry around coins as much any more,” Financial Markets and Consumer Affairs Minister Per Bolund tells The Local as he buys a bag of cherries from Korkmaz – by card, of course.

“But it's very important that consumers have the ability to choose if they want to pay by card or in cash. And I think the fact that the Swedish Riksbank is issuing new bank notes this year is a clear sign that cash will be around for a long while yet,” he adds. Their market has grown quickly since the start five years ago and the company now offers its services in ten countries across the world.

Nilsson says: “It's extreme in Sweden, young people even pay for their chewing gums by card. Germany, on the other hand, is one of the more conservative markets where cash is still used a lot.”

But he says many small businesses still struggle to offer the services demanded by customers.

“We want to get rid of signs that say 'we don't accept cards'. That's why we developed this service to help small firms sell coffee or cakes or whatever it is they sell.”

And for one of its customers, Korkmaz at Hötorget, the new technology has certainly boosted business.

"We offer payment by cash as well, but the sales are better when people can pay by card; nobody carries around cash any more,” he says. But not all small businesses rejoice at the trend. Stefan Löwstett, who has been selling sheep skin slippers and other traditional Swedish items since the 1980s, is one of the other regulars at Hötorget. He has been offering card payments for almost a year, but tells The Local it was by necessity rather than choice.

“Yes, definitely. We pay high card transaction costs. I haven't checked how much, because I don't dare finding out, but it's not free. We've been fighting this for a long time, but we have no choice – offering the possibility to pay by card is part of customer service."

“Most people want to pay by card and it keeps growing. Today I think about 60 percent of our customers pay by card and 40 percent in cash. But we will never stop offering cash payment. Particularly elderly people struggle with the technology and prefer to pay in cash," he says.