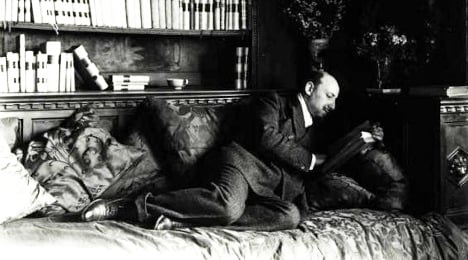 In a global first, the proto-fascist warmonger Gabriele D'Annunzio's DNA was reconstructed without exhuming his remains, forensic police said, raising hopes the technique could be used to solve cold cases.

D'Annunzio (1863-1938) gave the semen-splashed hankie to his lover, Countess Olga Levi Brunner, in 1916 as a souvenir after a night of passion.

Police in Cagliari in Sardinia analyzed the handkerchief, a letter the countess had penned to her beau and an ivory toothbrush conserved in the archives of the Vittoriale degli Italiani foundation.

Using a crimescope light they identified splotches of a liquid on the material not visible to the naked eye and compared the DNA results with that of Federico D'Annunzio, the right-wing revolutionary's great grandson.

Foundation chief Giordano Bruno Guerri joked that the experiment might even open the door to the future cloning of historical figures even if their remains have been lost.

"Nobody wants to clone D'Annunzio, but nobody knows what changes will take place in science and society. It's good the DNA has been collected," he said.

In 1919, D'Annunzio seized the city of Fiume, in what is now Croatia, to set up an independent state.

The state, which had a charter that foreshadowed the later Italian fascist system, fell a year later after a bombardment by the Italian navy.

His poems are still studied today in Italian schools.