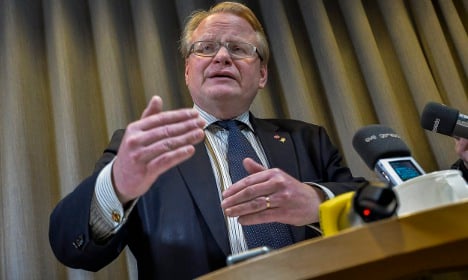 The new peacetime agreement, which was revealed on Friday, is set to be formally presented in March and comes just a few weeks after Sweden announced a similar defence deal with Finland.

“The focus of this partnership is the marine corps and the air force. The armed forces have been tasked with overseeing possible exchange of information, access to each other’s territorial waters and airspace,” added Hultqvist.

The move follows increased Russian airspace activity in the region, which has caused anger in both Sweden and Denmark.

In December a Russian military jet nearly collided with a SAS passenger plane out of Copenhagen. And in March last year another SAS plane was “just seconds” from crashing into a Russian plane, a pilot told the Dagens Nyheter newspaper.

“Of course the latest developments in the east play a part and have given us a reason to have a look at areas where we could extend our co-operation,” Denmark’s Defence Minister Nicolai Wammen told Danish news agency Ritzau on Monday.

Earlier this year an Ipsos poll for newspaper Dagens Nyheter suggested support for Nato membership has gone up in Sweden. Figures showed 33 percent of Swedes consider Nato membership to be a good idea, up from 28 percent in a similar survey in April last year.

Nato membership has been a long running debate in Sweden, largely favoured by the centre-right opposition but opposed by the ruling centre-left Social Democrat and Green Party coalition government.

Swedish military expert Johanne Hildebrandt told The Local in February: "The strange thing is that the country still has a close relationship with Nato but as non-members we can't affect anything. It is as if we were a mistress who in spite of several proposals refuses to get married, despite the fact that it would be beneficial to us in many ways."

But in an email to The Local on Tuesday, Hultqvist said that increased defence co-operation with Sweden's Nordic neighbours does not open the door to Nato membership.

“Partnerships with the Nordic countries are completely natural because they are our neighbouring countries and we are all part of Nordefco,” he said.

PARTNER CONTENT
What’s life really like when you swap the city for the country?
Url copied to clipboard!