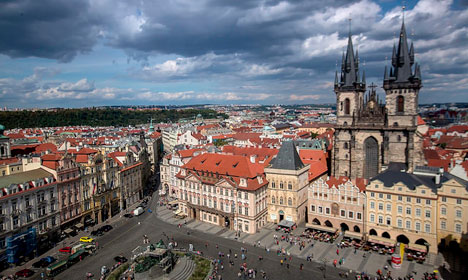 Prague in more peaceful times (ie when it's not overrun by Danish teens). Photo: Nitin Vyas/Flickr
The past couple years have been filled with tales of Danish teens causing trouble in Prague, with reports of lewd and drunken behaviour, destruction of hotel rooms, fights and even a stabbing incident.
Some 900 Danes are expected to hit Prague in the coming days and for the second year in a row they will be accompanied by Danish police officers who will attempt to keep them under control.
According to Lars Ruby from the Danish National Police (Rigspolitiet), the Danish officers will play a preventive role and hopefully keep the teenagers from generating as much negative attention as they have in years past.
“It gets big headlines in Europe’s newspapers when thousands of school kids go crazy on a drunken bender. So it’s better that a few uniformed cops go around town telling the kids about the Czech alcohol rules and zero tolerance,” he told Jyllands-Posten.
Others have a less generous take on the situation.
“Seen from where I'm sitting, it’s a bit of an admission of failure,” Claus Oxfeldt, the chairman of the Danish Police Union, said on Twitter, where he added it was “just a personal opinion”.
Mads Uffe Pedersen, a professor at Aarhus University’s Centre for Alcohol and Drug Research, said it was overkill to send police officers with the vacationing Danes.
“It’s quite strange that the youth can’t figure out how to behave properly and that it’s necessary to send police along when they travel abroad to get drunk,” he told Jyllands-Posten.
Even with the police escort, this year’s crop of Prague-bound Danes were already off to a rowdy start before even leaving Denmark.
Leif Rolle Pallesen, a tour bus driver who took a group of teens from the Aarhus area to Prague over the weekend, wrote in a public Facebook post that the teenagers were drinking heavily and smoking cannabis as the bus began its journey. He wrote that his teenager passengers were disrespectful and even threatening.
“I was verbally abused and had both my own and my family’s lives threatened by a group of Danish youth between 16 and 20 years old who have some parents who have failed them,” his post reads.
“I’m deeply embarrassed about my generation’s children. And this is unfortunately not a one-time experience. It is more the rule than the exception,” he continued.
Pallesen added however that it wasn’t all of the teens on board, but rather “the majority” who were causing the trouble.
The Prague-bound teens aren’t the only ones who will be travelling with a few extra sets of watchful eyes. According to Jyllands-Posten, the Danish travel agency Danski will bring 22 guards, police officers and fire fighters along when it takes some 1,200 Danish youth on a skiing holiday in Alpe d’Huez in France.