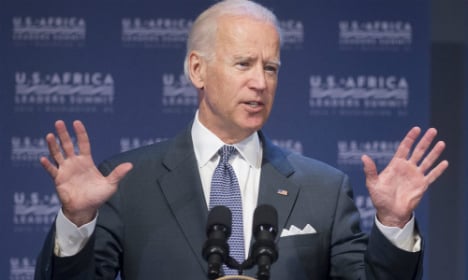 Biden's interview left no doubt that the U.S. would not be answering Ukrainian President Petro Poroshenko's request for weapons aid from Nato countries against Russia's advances in the country's eastern regions.

"We've said from the beginning that for this crisis, there is no military solution," he said in the written interview with Süddeutsche and its European news partners.

The interview comes days ahead of Monday's meeting between Merkel and U.S. President Barack Obama.

According to the Bertelsmann Foundation think tank, taming the Russian bear is sure to be on the agenda for the leaders.

While the U.S. has already pledged more non-lethal assistance to the Kiev government, Washington wants a tougher response than the economic sanctions favoured by Merkel.

However, that doesn't mean a military solution, said Biden in his interview.

"We have no interests in a military escalation and insist that the opposite occurs," he said.

His interview signalled that the U.S. might also be ready to flex its muscle into getting Russia to adhere to the Minsk Protocol signed in September.

The agreement signed by the two sides has so far been considered a failure, as fighting has continued and the rebels have since taken over the Donetsk International Airport.

"At stake is nothing less than European security," said Biden.

Canadian Prime Minister Stephen Harper will also be in Washington to meet with the German leader next week as well.

With both Harper and Obama in attendance, it is sure that CETA and TTIP, free trade deals between the EU and Canada and the US resepectively, will be on the agenda as well.

Bertelsmann thinks this will be the key topic on the agenda, as both trade agreements face bitter opposition in Germany.

Germans fear that signing the agreement will loosen European food standards and flood the market with American "frankenfoods", writes the Bertelsmann Foundation.

There are also concerns that the negotiations surrounding the two trade agreements are too secretive and value commercial interests over individuals' well-being.

Also on the agenda, says Bertelsmann, will be surveillance activity carried out by the National Security Agency and striking an international balance between liberty and security, especially in the wake of the French terrorist attacks that wiped out the senior editorial staff at satirical magazine Charlie Hebdo.

Merkel's upcoming visit coincides with a closing chapter in American-German relations. On Wednesday, it was announced that Richard Barkley, the last U.S. Ambassador to East Germany had died.

Both Barkley's daughters were born in East Germany and as Germany reunified, his time in Berlin was done. During his time, he noted and took seriously the rebellions of the free-thinking East Berliners.

"That was definitely the beginning of the end," he said at the time.