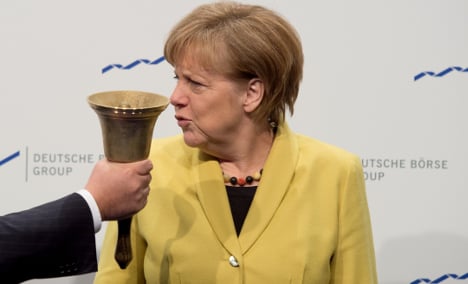 Chancellor Merkel was presented with a historic stock-market bell on Monday. Photo: DPA

"We have to maintain the pressure for competitiveness in Europe, otherwise nothing, I mean nothing at all will help us", she told a new year's reception held by stock market operators Deutsche Börse.

ECB director Mario Draghi is expected to announce a large-scale bond-buying programme on Thursday, which will see the bank buy up government debt from private banks in a bid to inject cash into the European economy and bring inflation back up towards the Bank's target of two percent.

The debt crisis "is not yet overcome, although we have it in hand to a certain extent", Merkel added.

"We have seen that when the need is great, Europe can decide faster than usual. That's an important signal".

Earlier in the day she had rejected the idea that the ECB's decision and upcoming elections in Greece, which could see anti-austerity party Syriza elected, represented a "fateful week for the Euro".

Some observers fear that if elected, Syriza would go back on previous Greek government's agreements with its creditors, which might lead to the country utimately being forced to leave the Euro single currency.

But the Chancellor said that "the policy of the government has always been aimed at keeping Greece inside the Eurozone".

German industry representatives have come out against the expected ECB bond buying programme.

Leader of the German Chambers of Commerce and Industry (DIHK) Martin Wansleben told the Passauer Neue Presse on Tuesday that it would be a "high-risk operation with uncertain effects on prices in Europe".

"There is a great danger that cheap money hobbles enthusiasm for competitiveness reforms", he said.