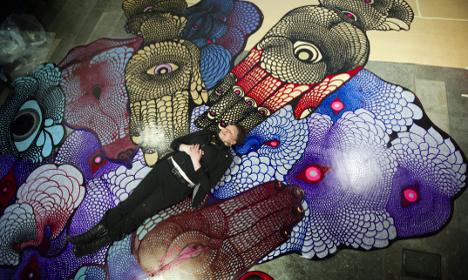 Carolina Falkholt and some of her art. Photo: TT
The 37-year old first became famous in Sweden after her abstract mural display "Snippmålningen", which represented vaginas went on display outside a high school in Nyköping just outside Stockholm.
But last spring, the municipality decided to have the graffiti mural created by the female-forms-focused-artist covered up – prompting a debate across the nation. Swedish artist Carolina Falkholt. Photo: TT
However Falkholt's infamy has not stopped Ikea from seeking her art out for its new 'Street Art' collection, set to be launched on the mega-home store's international market this April.
"She's a famous Swedish artist and she's very female. And we like that. That's why we asked her to make a design for us," Ikea press officer Tina Björeman told The Local.
She said the limited edition painting was all about "democracy".
"We think of it as 'democratic design'. We want to talk about democratic art, too. We think it's very nice that people can buy a wide variety of different kinds of art, at affordable prices."
Falkholt meanwhile is pleased to have been selected to showcase her art in this year's Ikea collection.
"Of course, it's very interesting to make a piece that perhaps many people will have in their homes," she told the Local.
The collection will feature 11 international artists alongside Falkholt.
Url copied to clipboard!