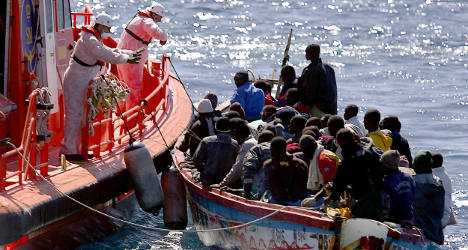 Rescue workers called for calm during the 2006 rescue of a craft with 74 African immigrants on board near Tenerife. File photo: Pedro Armestre/AFP

Police say the men killed from seven to ten people during the crossing after a fight broke out on board the vessel.

When weather conditions worsened during the night a Nigerian priest began to pray out of fear. The two Cameroonians took this to be the cause of the bad weather and  allegedly began to beat the man as well as several other Nigerian passengers with wooden boards placed at the base of the vessel.

They then pushed an unknown number of people into the water, having robbed them of up to €1,500 ($1,750) beforehand, Spain's El Mundo newspaper reported.

The ship eventually reached the Spanish coast but with only 29 of the original 50 passengers on board. Those who were not pushed from the vessel are believed to have fallen overboard in high seas.

Survivors were taken to a refugee interment centre in Almeria, with three witnesses eventually telling police what had happened on board.

Staff at the centre had previously noted that those survivors kept their distance from the two Cameroonians.

Spain's maritime rescue services last year came to the aid of 3,500 migrants found on boats off the country's coast, the government said on Wednesday, a 55-percent increase from the previous year.

A total number of 2,253 people were rescued in 2013, according to a spokesman for the maritime service.

Despite the dangers involved, thousands of migrants fleeing war and hardship try to cross the 15-kilometre (nine-mile) Strait of Gibraltar from Morocco to Spain on makeshift boats and inflatable dinghies each year, making Spain one of the main entry points into Europe for illegal migrants.

Speaking on Monday, Albares said that Spain is “totally favourable” to Russian citizens who “share our values.”

Speaking against the backdrop of mass protests in Russia against Putin’s mobilisation of thousands that has caused a mass exodus to the border, Albares reaffirmed that Spain is “aware that there are many people who do not want this war,” and that “Europe has nothing against Russian citizens.”

After the European Union suspended the visa agreement signed with Moscow at the beginning of September, he was keen to make clear that this did not mean Spain was closed to Russians fleeing Putin’s regime. “The decision was made not to block completely… [for] people who are opposing the war, the members of NGOs, the defenders of human rights, the journalists who are risking their lives…”

In light of the visa suspension, Spain will return to a system of individual interviews on a case-by-case basis.

“It’s not that there is suddenly an avalanche of Russian citizens and we don’t know who is entering,” Albares said, quelling security fears, “that’s why it’s going to be analysed on a case-by-case basis.

“Those who speak our language, those who reach out to us, those who share our values have to have a place among us,” he added.

As for the illegal referendums the Russians are attempting to undertake in annexed territories, Albares aligned himself with his European colleagues and claimed that the results would not be recognised by Spain or any other EU member state.

He also confirmed that a new set of economic sanctions is being put together in Brussels, and that “there is no real indication” Putin is considering the use of nuclear weapons or will stray from conventional war methods.

Spaniards should, he added, not be “distressed” about this possibility.

READ ALSO: How much influence does Russia have over Spain?