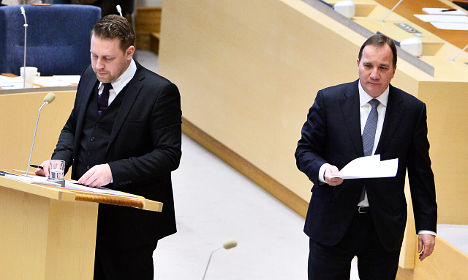 "The party has no confidence in the Prime Minister of Sweden,” acting leader Mattias Karlsson told news agency TT ahead of his appearance in the Riksdag.

The anti-immigration party, which is the third largest in the Swedish parliament, caused political chaos just before Christmas by voting against the government’s budget and siding with the country’s centre-right Alliance parties.

Social Democrat Prime Minister Stefan Löfven responded on Wednesday morning to the no confidence motion against him.

"The Sweden Democrats are paying straight into the terrorists' hands," he said, referring to SD's repeated criticism of Islam.

Löfven initially called a snap election before announcing that he had reached a compromise with the Alliance and would follow their budget until March, a deal known as the December Agreement.

The Sweden Democrats argue that the political situation remains too fragile and say that Löfven will not be able to gather enough votes in parliament to get his policies through.

“He has broken a long list of very heavy promises, and above all, he has avoided giving the Swedish people an opportunity to have their say on how this very complicated parliamentary situation will be resolved,” Karlsson told Sveriges Radio on Tuesday.

The nationalists previously called for the now cancelled snap election to become a referendum on immigration. It is the only party calling for a cap on the number of foreigners moving to Sweden.

But it is unlikely to gather enough support to push a vote of no confidence in the government through parliament.

Some centre-right politicians have been critical of the December Agreement that the Alliance and the Social Democrat-Green coalition government spent the holidays stitching together. They argue that the Alliance gave up the chance for the public to formally vote in their policies again (the Alliance was in power until September 2014).

The Moderate Party, previously led by Fredrik Reinfeldt has a newly elected leader – Anna Kinberg Batra – who has said she intends to silence critics. She has argued that the December Agreement will allow Sweden’s centre-right parties to have a greater say on controversial issues such as the closure of Bromma airport, free schools and welfare costs.